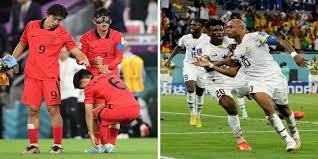 Ghana’s chances of making it to the second round of the Mundial received a major boost after the Black Stars defeated South Korea in a thrilling encounter in group H.

The Blacks stars led 2-0 in the first half but found a way to conspire to concede two goals to put scores at 2-2 later on in the game.

The luck soon smiled on the Ghanaians after regained the lead after a second-half fightback from South Korea.

The 2010 quarterfinalists impressed in an opening 3-2 defeat against Portugal and went in front in the 24th minute when defender Mohammed Salisu swept home Jordan Ayew’s curling free-kick.

Ghana had another 10 minutes later after

Ayew whipped in another superb delivery from the left and Ajax man, Kudus connected to it and headed in  Ghana’s second goal of the encounter.

South Korea began an onslaught against the Ghanaians shortly after the break, and it soon paid off with quick goals from Cho Gue-sung.

However, Ghana regained the lead in the 68th minute when Kudus side-footed home his second after a mis-kick from Inaki Williams saw Gideon Mensah’s cross reach him inside 68th minute.

Gideon Mensah cuts it back from the left flank, Inaki Williams mis-kicks in the middle and the ball falls to Mohammed Kudus, who side-foots it home with his left foot for his second goal of the game.

Recall that Ghana lost to Portugal in the first game against of the group by 3-2.

Ghana has cored five goals so far in the competition.

The Black Stars will face South American side Uruguay in the last group H game next week.