Qatar 2022: Homeboy Embolo scores for Switzerland as they beat Cameroon 1-0 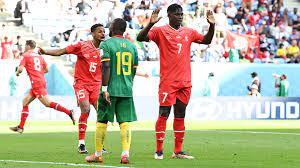 The Indomitable Lions of Cameroon succumbed to the superior fire power of the Switzerland national team after losing 1-0 in Group G opener at the Al Janoub Stadium  in Qatar.

Unfortunately for the indomitable Lions of Cameroon, it was their home boy Embolo who scored for the European nation.

Switzerland score with their first shot on target. They move the ball across the pitch quickly, eventually reaching Shaqiri on the right, who slides a cross intoBreel  Embolo allowing him to tap in from six yards. Embolo didn’t celebrate his goal against his country of birth.

Cameroon haven’t had the best time at WCs since Italia 90 with one victory and ten defeats in 15 games since the defeat against England.

The result in Cameroon meant that no African team has scored a goal so far in the mundial.

The last African team to play its opener is Ghana and they will slug it ot later today against the Selecao of Portugal. Sex education: A rejoinder to Adeleye-Fayemi's letter to the minister