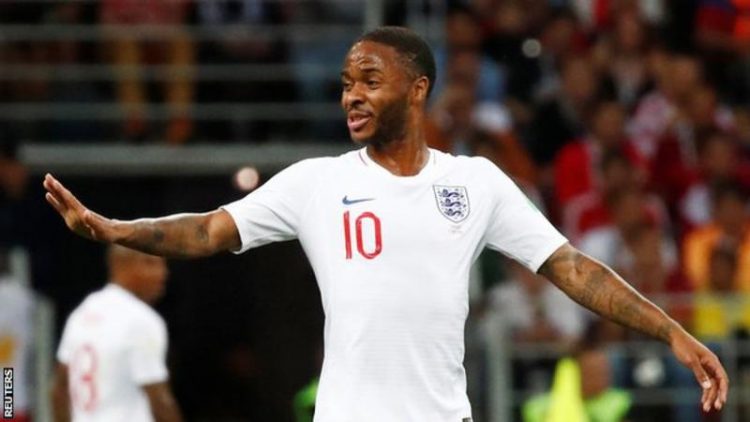 Raheem Sterling was yet again racially abused during England’s Euro 2020 qualifier on Saturday as a Bulgaria supporter was thrown out of Wembley and arrested.

According reports, a steward overheard the supporter using racist language about Sterling during the first half of ­England’s 4-0 win and was immediately ejected from the stadium and handed to police.

Meanwhile, the Police confirmed a man was arrested on suspicion of an aggravated public order offence and taken to a north London police station, where he was later released without charge.

UEFA was informed of the incident through their match-day delegate and both Sterling — who scored and also set up the first of Harry Kane’s three goals — and England manager Gareth Southgate were briefed after full-time.

A Football Association spokesperson said. “An individual seated in the away section was ejected and arrested for discriminatory abuse ­during the ­England v ­Bulgaria match. Wembley Stadium operates a zero tolerance ­policy on anti-social and discriminatory behaviour and anyone found guilty will be ejected and reported to the police.”

Two of England’s first three Euro 2020 qualifying matches have now been marred by alleged incidents of racism after Sterling and Tottenham’s Danny Rose were among the players subjected to racist chanting during the 5-1 win in Montenegro in March.

During England’s last match in the Bulgarian capital, a Euro 2012 qualifier in September 2011, Ashley Young, Theo Walcott and Ashley Cole were subjected to monkey chants by home supporters, leading UEFA to fine the Bulgarian FA €40,000.

Since then, UEFA’s determination to stamp out racism has continued to come under scrutiny. Montenegro was fined €20,000 and ordered to play one match behind closed doors following the abuse in Podgorica — a punishment later condemned by Rose as “shocking”.

Sterling, who has emerged as an inspiring anti-racism campaigner, showed he was not in the least affected by the latest incident as he produced one of his finest England displays in last night’s 5-3 win over Kosovo, scoring once and producing three assists.

Speaking after being named man-of-the-match, he said it was “most ­definitely” one of the most enjoyable periods of his career.

London-born Sterling was targeted in the capital by Chelsea supporters ­during a high-profile incident in December 2018.

The Blues subsequently banned a supporter for life for using racially ­abusive language towards the 24-year-old and temporarily excluded five ­others from Stamford Bridge for between one and two years over ­incidents at the same match.