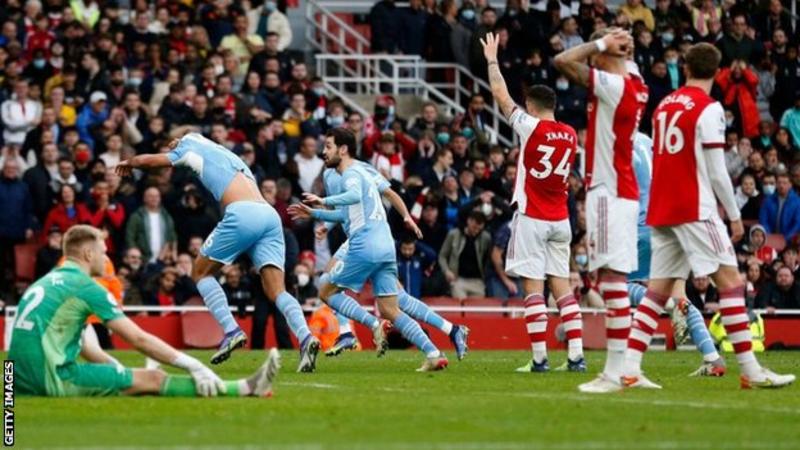 Rodri scored a stoppage-time winner as Manchester City beat 10-man Arsenal in an incident-packed encounter to move 11 points clear at the top of the Premier League.

That advantage will be cut to some extent on Sunday when second-placed Chelsea host third-placed Liverpool, although no team has failed to win the Premier League title when beginning the new year with a lead as big as City’s.

Arsenal looked to have held out for a draw, but Rodri steered in a loose ball in the 93rd minute to help City claim an 11th successive league win in a game that also had two major VAR incidents and an avoidable red card for Gunners defender Gabriel Magalhaes.

The hosts were the better side early on at Emirates Stadium, and Bukayo Saka swept in a deserved opener to finish off a slick move before the Gunners self-destructed after the break.

Riyad Mahrez levelled from the penalty spot after Bernardo Silva was brought down by Granit Xhaka, referee Stuart Attwell overturning his initial decision after viewing the pitch-side monitor.

Arsenal felt aggrieved at that call after their own shouts for a penalty in the first half were denied following a long VAR check for Ederson’s tackle on Martin Odegaard.

But one minute after conceding from a penalty Gabriel was sent off for two yellow cards in quick succession, the first for trying to scuff up the spot and the second for a foul on Gabriel Jesus.

Arsenal, whose manager Mikel Arteta was forced to watch from home following a positive Covid-19 test, remain fourth in the table.

Do not despair, Macaulay enjoins Deltans in New Year message