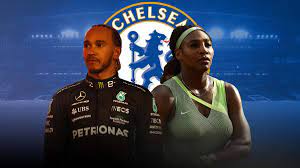 313
SHARES
1.6k
VIEWS
23 grand slam winner Serena Williams and Formula One shinning star Lewis Hamilton have both considered a bid to take over Chelsea football club.
The two international sport stars are reported to be joining the takeover bid by Sir Martin Broughton, one of three remaining bids for the Blues.

Serena and Hamilton have already tabled 10 million pounds each to bid for the London based club which is being headed by sports marketer Sir Martin Broughton.

Findings have shown that both Williams and Hamilton have dabbled into a joint business in the past and have now stepped up their business partnership ideas.

Recall that the Ricketts family in America who initially showed interest in the bid has pulled out of the acquisition race.

The sale of Chelsea comes after the Russia invasion of Ukraine and the consequent banishment and sanctions placed on present owner Roman Abramovich prompted him to put the club up for sale.

Hamilton is a seven-time Formula 1 world champion, whilst Williams is a former world no.1 and 23 grand slam winner in the professional tennis circuit.