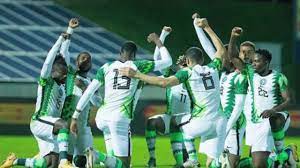 The super Eagles of Nigeria and the A Seleção of Portugal will square up against each other in an international friendly billed to hold in September, 2022.

The three-time African champions were initially scheduled to play Guinea Bissau in a double-header Africa Cup of Nations qualifiers in the FIFA international break.

But with the qualifiers postponed until March 2023 by the Confederation of African Football last month, the NFF is busy arranging a grade A friendly for the Eagles.

According to Sanusi, a discussion with the Portuguese FA for the friendly game between Nigeria and Portugal is in top gear.

“We are working on arranging a grade A friendly game with Portugal ahead of the next FIFA window,” Sanusi said.

“Following the postponement of the AFCON a friendly game is necessary for the Eagles.

“Arrangements are in full gear and we are close to finalizing the details. Once that is done a statement will be released by the Nigeria Football Federation.”

It will be the first time that Nigeria and Portugal will meet at the senior level even though both countries played against each other three times at the U-20 World Cup with Portugal winning all three meetings (twice in 1989 and 2013).

The September international friendly will serve as a warm-up game for the Europeans who are in the same group as the Black Stars of Ghana who booted Nigeria out of the World Cup race.