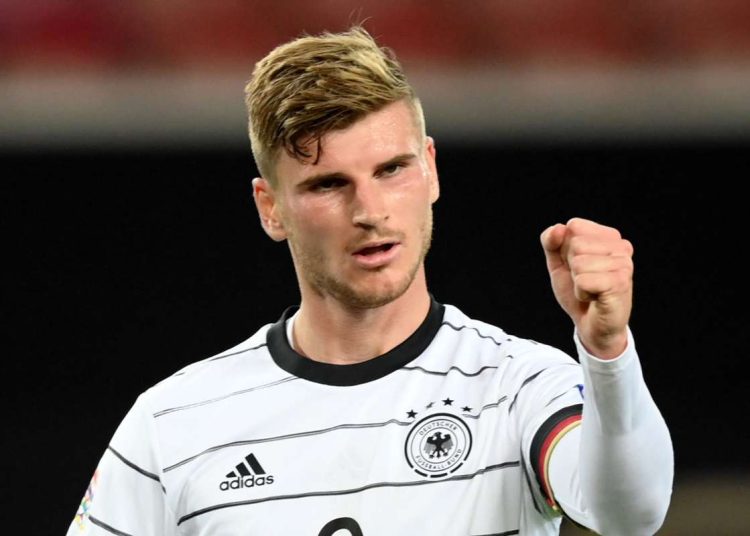 Germany became the first country to qualify for the 2022 FIFA World Cup in Qatar on Monday with Timo Werner scoring twice in a 4-0 win away to North Macedonia.

The fifth victory in five matches under new coach Hansi Flick, matching the record of predecessor Joachim Loew, has given Germany an unassailable lead at the top of Group J.

But that was also due to to Armenia losing 1-0 to Romania elsewhere.

Germany dominated throughout against the side who inflicted only a third-ever World Cup qualifying defeat against them at home in March.

But they needed until the second half to make the breakthrough.

Kai Havertz tapped into an empty net to cap a fine counter-attack in the 50th minute to break the North Macedonian resistance.

The lively Werner then smashed a quick-fire brace before teenager Jamal Musiala completed the rout with his first senior international goal.

Germany have 21 points from eight games before concluding the campaign in November at home to Liechtenstein and away to Armenia, who are now fourth on 12 points.

Romania, on 13, are best-placed to secure second and the play-off spot but North Macedonia, above Armenia on goal difference, are also in contention.

“We have now qualified, that is very, very important first of all for us and it gives us confidence for the next games,” Havertz said in an interview.

Team captain Manuel Neuer, back in goals after injury, agreed the team should now have high ambitions.

“If we play for Germany the goal is always to win titles, to reach the highest goals possible. That’s how we will approach it there.”

Flick made five changes to the team which beat Romania last time out, with Mueller and Havertz also coming into the attack and proving decisive.

Home goalkeeper Stole Dimitrievski denied first Joshua Kimmich then Werner, who was actually offside, and had help from the post when the Chelsea forward beat him on the stroke of half-time.

It was Werner’s Stamford Bridge colleague Havertz who did find the net when a brilliant pass from Serge Gnabry released Mueller.

The Bayern Munich man laid the ball off for a simple finish rather than shoot himself.

“We have qualified as quickly as possible,” said Flick. “We also have to give the team a compliment for their attitude today (Monday).

“We can be happy that we’ve also finished this game with a win.”

Mueller, who notched the winner against Romania on Friday, was provider again to set up Werner in the 70th minute with a clever flick following a quick free-kick.

In the closing stages, Musiala converted an assist from fellow substitute Karim Adeyemi.