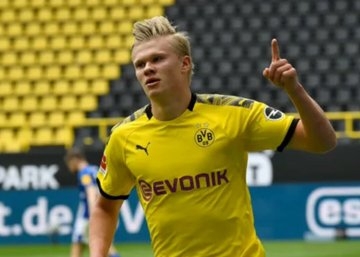 Borussia Dortmund striker, Erling Haaland has reportedly informed the Bundesliga club that he would leave at the end of the season to join Manchester City.

There were reports late on Monday that Manchester City boss Ferran Soriano has got in touch with Borussia Dortmund chief executive Hans-Joachim Watzke.

He has informed him that they would activate a 75-million-euro (78.9-million-dollar) release clause in Haaland’s contract.

Haaland was also reported to have completed medical tests at the Erasmus hospital in Brussels on Monday.

Borussia Dortmund said the player was allowed to have the day off to “take care of personal matters.”

According to the report, the staff at the Erasmus hospital was surprised that one of the most desired football players in the world was suddenly there.

Haaland, however, reportedly decided to go to Brussels so the tests could take place without any fuss.

Borussia Dortmund’s head of professional football Sebastian Kehl had said on Sunday that a transfer could be concluded this week.

A replacement for Norway’s Haaland is already being lined up by Borussia Dortmund.

Kehl is hopeful a move for Germany international Karim Adeyemi, currently with Red Bull Salzburg, will soon be completed.

Haaland himself switched to Borussia Dortmund from Salzburg early 2020 for 20 million euros.