by Ediri Oyibo
in Tech, Telecom
Reading Time: 2 mins read
A A
0 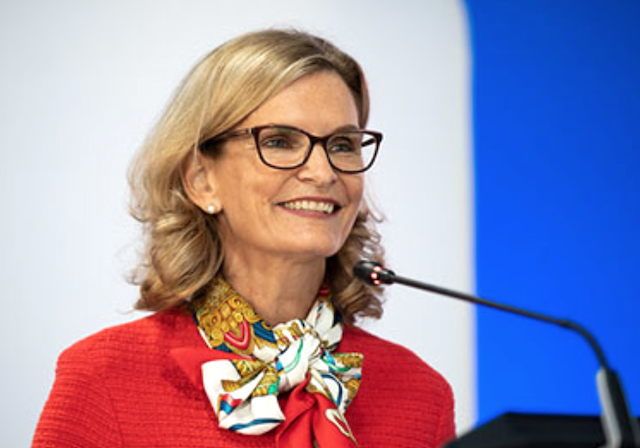 Member States of the International Telecommunication Union (ITU) have elected Ms Doreen Bogdan-Martin of the USA as the organisation’s next Secretary-General.

The organisation, which made this known on their website on Thursday said Bogdan-Martin won the position with 139 votes, out of 172 votes cast, which made her the first woman to lead ITU.

TheNewsGuru.com (TNG) reports  ITU was established in 1865 and it became a UN specialised agency in 1947.

UN Secretary-General reacts to breakdown of negotiations at COP27

The election took place during ITU’s Plenipotentiary Conference (PP-22) in Bucharest, Romania, with representatives of Member States voting during the meeting’s morning session.

​Bogdan-Martin was endorsed by her country’s government as a candidate to make the digital future inclusive and accessible for everyone, especially in developing countries.

US President, Joe Biden, in a Sept. 20 statement backing her candidacy, said: “Ms Bogdan-Martin possesses the integrity, experience, and vision necessary to transform the digital landscape.”

Bogdan-Martin, in her acceptance speech, said the world was faced with significant challenges like escalating conflicts, climate crisis, food security and needed to be provided with a strong and stable foundation for growth.

The Secretary-General-elect, whose four-year term would commence on Jan. 1, 2023, pledged to continue driving the institution to be innovative and increasingly relevant for Member States

She also said that there would be a better positioning for all to embrace the digital environment and make progress on achieving UN SDGs and connecting the unconnected.

Bogdan-Martin said: “Whether it’s today’s children or our children’s children, we need to provide them with a strong and stable foundation for growth.
“The world is facing significant challenges – escalating conflicts, a climate crisis, food security, gender inequalities, and 2.7 billion people with no access to the Internet.

“I believe we, the ITU and our members, have an opportunity to make a transformational contribution. Continuous innovation can and will be a key enabler to facilitate resolution of many of these issues.”

She, however, had held leadership positions in international telecommunications policy for over two decades.

Throughout her career, Bogdan-Martin  had brokered innovative and visionary partnerships with the private sector, civil society, and other UN agencies to accelerate digital inclusion and connectivity.
As Director of ITU’s Telecommunication Development Bureau in recent years, Bogdan-Martin had emphasised the need for digital transformation to achieve economic prosperity.

She also emphasised the need for job creation, skills development, gender equality, and socio-economic inclusion, as well as to build circular economies, reduce climate impact, and save lives.

Her current term as Director of ITU’s Telecommunication Development Bureau ends on 31 Dec.
Among her campaign priorities, Bogdan-Martin  pledged to lead ITU into a new era of global and regional partnerships.

She added that the organisation must evolve and sometimes break from old ways to stay relevant.
At the ITU Plenipotentiary Conference, Member States will also elect candidates to the posts of Deputy Secretary-General, as well as Radio-Communication Bureau Director.

The voting for ITU’s senior leadership will be followed by elections for the 12-member Radio Regulations Board and for regionally allocated Member State places on the 48-seat ITU Council.

The union is the UN specialised agency for Information and Communication Technologies (ICTs), driving innovation together with 193 Member States.

ITU has membership of over 900 companies, universities, international and regional organisations.