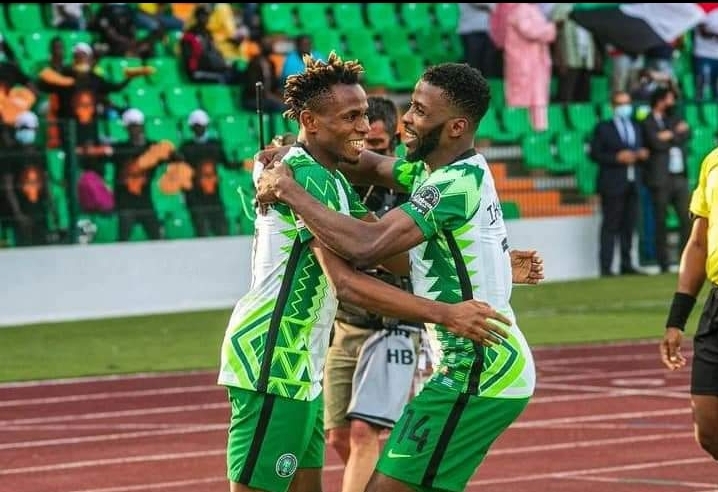 Nigeria’s Super Eagles on Wednesday defeated Guinea Bissau to win all their three Group D matches and advanced to the knockout phase of the ongoing 2021 Africa Cup of Nations (AFCON) in Cameroon.

The win and advancement to the knockout phase have drawn accolades from President Muhammadu Buhari, who commended the Super Eagles for keeping hope alive by winning all their group matches.

The president, in a statement by his Special Adviser on Media and Publicity, Mr Femi Adesina, on Wednesday in Abuja saluted the Eagles for advancing to the second round of the tournament in grand style.

The president urged the Austin Eguavoen-led team to maintain and even surpass the terrific form that made them leaders in the group stage, as ”Nigeria hopefully looks forward to a total of seven emphatic wins in this competition.”

According to him, the positive reputation of good sportsmanship the traveling fans, sportswriters and the football team have demonstrated in Cameroon will continue to enliven the importance of sports.

He said this was particularly football, as an enabler of development, peace, tolerance, friendship and cooperation.

The president wished the Super Eagles the very best.

He pledged that his administration would continue to support the efforts of international, regional and national football organisations to use the sport as a tool to build a better and peaceful world.

Meanwhile, Coach Augustine Eguavoen says people are once again beginning to respect the Super Eagles following their performance at the group stage of the 2021 Africa Cup of Nations (AFCON) in Cameroon.

Eguavoen told newsmen during his post-match conference that a lot of people felt that Nigeria was not good enough to win the tournament because of the team’s performance in the last few months.

Nigeria’s Super Eagles on Wednesday in Garoua advanced in style to the knockout phase of the 2021 Africa Cup of Nations (AFCON) in Cameroon.

They beat Guinea-Bissau 2-0 at the Stade Roumde Adjia to become the only side at this 33rd edition of the competition to win all their three group games.

Winners of groups A, B and C who had advanced earlier failed to win all their three games.

“But again it is the same set of players who performed brilliantly well prior to the AFCON, the last one in Egypt and also a year or couple later.

“All of a sudden, things didn’t go well as they were supposed to for some reason and that’s why people were trying to write Nigeria off.

“For the first game, nobody gave us a chance but we did the job collectively,” said the coach.

He said he told the players to express themselves and be committed, “you don’t have any other country to play for, it’s only Nigeria and you know how passionate our people are when it comes to football.

“Now, people are thinking and starting to respect Nigeria.”

He, however, said the team would not allow the praises get to their head, adding that they would continue to respect their opponents in the tournament.

“For instance, if you see today’s game and like I said before, Guinea-Bissau is a very strong team. They were no pushovers at all,” said Eguavoen.

He added that he expected a tough game because the Guinea-Bissau team was physically and technically very strong.

“So, they gave us a run for the money, but at the end of the day we were able to get those two goals and I am very satisfied with the performance.

“The most credit must go to the players for doing everything we told them to do,” he said.

Two plots of land not enough for my cars – Pastor Ibiyeomie

Two plots of land not enough for my cars - Pastor Ibiyeomie

[Devotional] IN HIS PRESENCE: Sexual issues in marriage [1]