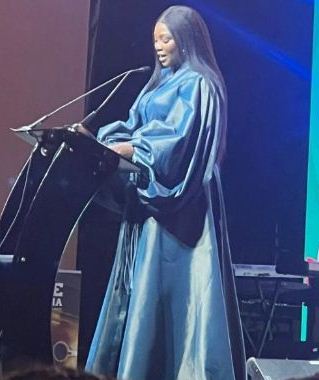 Veteran Nollywood actress, Genevieve Nnaji, has been seen for the first time in months following rumours that she was suffering from a mental illness, as she delivered a speech at the 2022 Creative Africa Nexus Weekend (CANEX WKND) in Ivory Coast.

Recall that an unverified report on the internet alleged that the actress was hospitalized due to a mental condition.

The 43-year-old actress has been away from social media since she deleted every post on her Instagram page, leaving fans worried.

However, in a new video sighted online, Genevieve was seen on stage in a bright green outfit, delivering a speech at the event.

According to the organizers, via an announcement on Twitter,  CANEX WKND event which held  from 25 – 27 November 2022, featured some of Africa and the diaspora’s top creative names, experts, Celebrities, brands, and thought leaders including Nigerians Top personalities, Genevieve Nnaji, Chimamanda Ngozi Adichie, Bruce Onobrakpeya, and Singer Tekno.

TheNewsGuru.com (TNG) reports that earlier in the year, the beautiful veteran thespian was said to have been struggling with some form of mental pressure that led to her decision to stay away from the public

However, on November 26, 2022, she finally made a return as she attended an event in Abidjan, Cote D’Ivoire, where she discussed the importance of the film industry to Africa

@stevechuks_: “The Fit, The hair, that beauty!!! Everything is giving!!!!! Africa’s superstar actress.”

@purpl_ewrites: “Can Nigerians finally give her a break? Cos obviously popular people cannot take a break from the world. Can they rest now.”

@raldieyoung: “I’ll just say it… A QUEEN AND MORE.” @iamjauntypedia: “God in heaven, you’re wonderful. Welcome back my Queen.”

@chiczone.ng: “Still as beautiful as ever.”

@drchristyprecious: “I’m so happy. Coincidentally I spoke about her yesterday. So happy to have you back.”

@jobemmanuel49: “See me smiling like I won a lottery.”

@agavafitness: “When you understand the power of scarcity.”