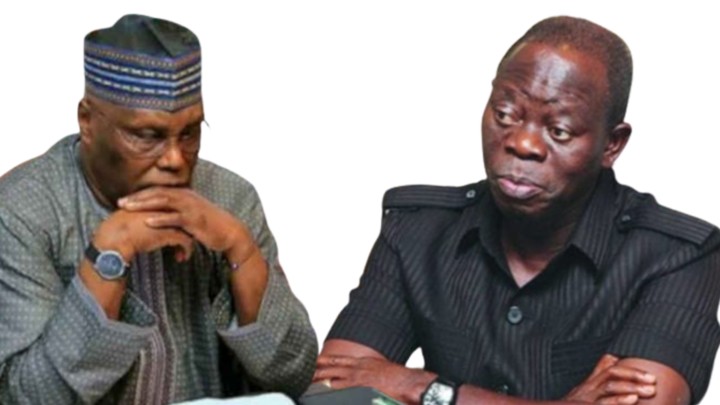 Former Edo Governor, Adams Oshiomhole, has described the Presidential Candidate of the Peoples Democratic Party, PDP, Atiku Abubakar, as a serial betrayer who cannot be trusted and the weakest of all the frontline flagbearers.

The two other candidates that stand as frontline flagbearers in the 2023 general elections are Asiwaju Bola Tinubu of the ruling All Progressives Congress (APC) and Peter Obi of the Labour Party (LP).

Oshiomhole, who is the deputy director-general of the All Progressives Congress (APC) Presidential Campaign Council, spoke on Channels Television’s Politics Today, as pointed out PDP’s limitations and constraints.

According to him, Atiku’s ambition is just about himself and not about Nigeria. He asserted that PDP cannot return to power next year,

Oshiomhole said Atiku lacked consistency, having moved from the PDP to the Action Congress of Nigeria (ACN), back to the PDP and to the APC and finally to the PDP.

He said: “For Atiku, if he is not the candidate, he takes a flight to Dubai. But you are talking of someone who upon leaving office, supported his wife rather than himself, talking of selfless service and gender equality. It speaks to character. When you have a sense of belief, you cannot be jumping from one party to the other every other election.”

Oshiomhole also said the 76-year-old Adamawa-born politician (Atiku) cannot be trusted as echoed by aggrieved PDP governors known as the G5 or the Integrity Group.

Oshiomhole said: “PDP governors said we can’t trust him, every agreement we made with him, he broke it; he is a serial betrayer of agreements. In this case, everything is on the surface. First, there are three main candidates, and there are several other candidates, and I believe they all have good intentions.

“It is no secret that you have, at least five governors (PDP G-5 governors), including governors that matters in the south south — when you talk about the stronghold of the PDP, some of the governors revolting against Atiku are from that part of the country.

“Our candidate, Asiwaju Bola Tinubu, went to Gbaramatu Kingdom for the first time, and I’m not sure a PDP candidate has ever gone there because they’ve always taken them for granted. PDP is a house divided against itself.

“The real damage being done to the PDP’s presidential candidate, Atiku, is that governors who have never decamped from PDP, who can be called PDP indigenes, they’ve spoken to the fact that you can’t trust the PDP candidate Atiku, and they withdrew from his campaign council. Even Mimiko is in that group.

“Atiku went to Ondo State today (Wednesday), and didn’t have the honour to be received by high-profiled politician in the state. This is not secret to be uncovered.

“If five people (G-5 governors) have reasons to question the character of Atiku, that you can’t trust his words, that he can’t even manage his own party, he can’t grant concessions. He is so fixated about certain things. He is totally insensitive to Project Nigeria — the need to keep Nigeria together. He could go to a place like Kaduna and speak to them, saying don’t vote a Yoruba man. He didn’t say don’t vote for Tinubu, that’s a huge difference. Don’t vote for an Igbo man. A man who seeks to govern Nigeria has said this publicly on records. How can you entrust him? You can’t manage your household, and you want to preach unity. That’s not possible.”

On why he believes Atiku cannot win the poll, Oshimhole said: “It is not difficult to see why Atiku can’t win. He can’t. When he had the benefit of a joint ticket between Atiku and Obi, he got all the votes in the East, but he couldn’t make it. What miracles does he have? This house is broken.

“Atiku is battle-weary. He has nothing new to say. He will sell everything. I will sell NNPC. Once he says he will sell NNPC, people will say oh! that was the way you sold NITEL. What became of NITEL? Oh! I will enrich my friends, so is it about enriching your friends?

“I think for Atiku himself, it is just hard for him to throw in the towel and say I give up. So, he’d rather patch it up. He’s the weakest link right now, among the three leading candidates. Atiku and Obi have been on the ballot before, and they were rejected.

“What Atiku couldn’t atikulate last time, is he planning to disatikulate. For Atiku, if he is not a candidate, he’ll take flight to Dubai.

“When you’ve set some beliefs, you cannot be jumping from one party to another. Play Atiku’s statement since 1999. As a vice president he challenged his own boss at the end of his tenure, he is in history as the only vice president who decided to question the right of his boss to contest for a second term, and the boss persuaded him. Atiku’s ambition is just about himself.”