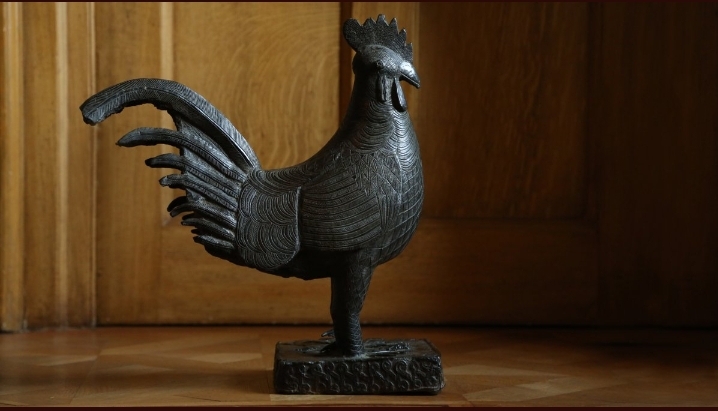 Today, Cambridge University became the first British institution to return to Nigerian authorities a Benin bronze stolen from the country in 1897.

TheNewsGuru.com (TNG) reports the bronze cockerel named Okukor was taken from the Benin Kingdom during a punitive expedition in 1897 when thousands of bronzes were looted by British forces.

The bronze cockerel was looted by British colonialists from the palace of the King of Benin and was given to Jesus College, a college of Cambridge in 1905 by the father of a student.

German city of Cologne to return Benin Bronzes to Nigeria

Cambridge University handed over the statue of the cockerel to a delegation from Nigeria, led by Professor Abba Issa Tijani from Nigeria’s National Commission for Museums and Monuments in a ceremony that took place at Jesus College.

Nigeria’s National Commission for Museums and Monuments received the Benin bronze from Jesus College on behalf of the Federal Government of Nigeria and the Royal Court of Benin.

A decision for it to be returned was made in 2019 after students campaigned, following which the statue was removed from display at the college in 2016.

The return of Okukor, described by the college as a “royal ancestral heirloom” is expected to spark a wave of repatriation ceremonies, as the cultural world continues to reckon with concerns over the ethics of plundered historical artefacts.

According to Sonita Alleyne, master of Jesus College, returning the artefact was the “right thing to do” and that the bronze piece was of “cultural and spiritual significance to the people of Nigeria”.

Meanwhile, the Oba of Benin, Omo N’Oba N’Edo Uku Akpolokpolo, Ewuare II had expressed excitement at the return of the bronze.

The Oba thanked the student body of Cambridge for “bringing to light the historical significance of this revered piece of the royal court of Benin”.

“We are indeed very pleased and commend Jesus College for taking this lead in making restitution for the plunder that occurred in Benin in 1897.

“We truly hope that others will expedite the return of our artworks which in many cases are of religious importance to us,” he said.

TNG reports after Jesus College announced its decision to return the bronze in November 2019, a host of regional museums committed to or said they were also considering returning artefacts.

The UK retains hundreds of Benin bronzes – plaques and sculptures dating to the 13th century, made by artisans from the Edo culture.

They were distributed from private collections and in some cases donated by soldiers who took part in the 1897 looting.

Historically, much of the focus has been on the British Museum, which holds 900 objects – the largest collection in the world.

BREAKING: 26-year-old man who put himself up for sale for N20 million arrested