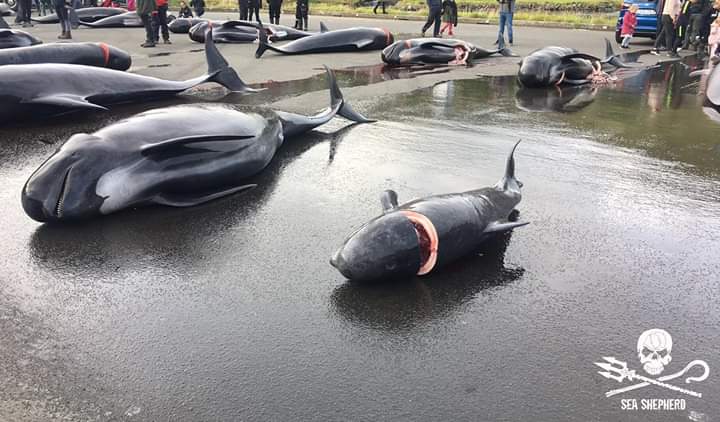 The grindadrap, more commonly referred to as the grind, an annual opportunistic whale hunt by local villagers in the Faroe Islands, has left 98 whales gruesomely slaughtered.

TheNewsGuru (TNG) reports the grind that occurred in Vestmanna, a town on the island of Streymoy in the Faroe Islands, has raised concerns.

Sea Shepherd UK, an international non-profit, marine wildlife conservation organization, managed to document the grind, the 11th in 2019 alone, for the first time ever.

The grind in Vestmanna happened on August 27th, and it ended up taking the lives of 98 whales, including young calves and pregnant mothers, after a harrowing 5-hour boat chasing and harassment of the pod by the Faroese.

According to Sea Shepherd UK, after the chase and harassment, the killing took around 12 minutes, with the stressed and exhausted pilot whales of all ages killed indiscriminately in front of their family members until all were left silent on the blood red sands of Vestmanna.

On August 28th, after having followed a truck from the site of the grindadrap, the Sea Shepherd crew managed to document the Faroese process of dumping the pilot whale remains, calves and fetuses over a cliff into the sea.

98 pilot whales were killed in today's grindadrap at Vestmanna- including 4 calves and at least 5 pregnant whales.

The site of the dumping is just South-East of the small town of Leynar, a dumping site previously uncovered by Sea Shepherd in 2010.

“In 2010, during a maritime undercover mission, our team had discovered this underwater graveyard near the hunting beach of Leynar. Dozens of pilot whale corpses were lying on the seafloor, some of which were untouched.

“The Faroese claimed that these were only parts that could not be eaten or whales considered ill and not fit for consumption,” said Lamya Essemlali, President of Sea Shepherd France and previous Faroes campaign leader.

“Seeing how the Faroese dump these victims, it is clear that they have no respect for pilot whales or dolphins – either when they are alive, or after they have been killed,” Rob Read, Faroes campaign leader, and Sea Shepherd UK director said.

The Faroe Islands – conflicting emotions of finding beauty in the rough landscapes mixed with the heavy knowledge and first hand experience of the senseless, cruel and barbaric massacre of innocent sentient beings.

Whilst driving around the islands you cannot avoid to feel awed by the scenery, the endless stretches of grassy mountains, rocky cliffs surrounding the fjords, leading to sandy beaches.

However, you also know that this picturesque landscape can change in front of your eyes within minutes…you are in your car, checking websites, looking out for boat traffic, birds movements and an unusual amount of cars heading in one direction.

It’s the 27 August 2019, and suddenly one of the websites announces a ‘Grind’ happening…your adrenaline shoots through the roof, your hands are shacking whilst you try to translate the article to find out the what and where. You head towards the killing beach, hoping the pod will escape.

Near the beach you are surrounded by people who are preparing for the massacre to come, people laying out ropes, with hooks attached, people who carry knives attached to their hips. Families with children of all ages start to arrive and you wait and hope, wait and hope.

One police car and a van have also arrived as they know you are from Sea Shepherd.

Then you are informed that the pod will not be driven into Laynar but into Vestmanna instead. You as every one else head to the cars to drive over to the next killing beach, where the preparation starts all over again.

Boats are leaving the habour to meet the others and suddenly you can see the boats coming in, driving a family pod of pilot whales in front of them. Then you start to hear the banging and shouting, the wall of sound the whalers create to move the pod closer and closer to the beach. You hear the exhausted pilot whales breathing, the desperate blowing of air out of their blow hole.

The people on the beach are getting ready, grabbing hold of the ropes, you can feel their excitement and anticipation; and then it starts – people running into the water, pilot whales splashing in panic whilst being hooked and dragged onto the beach. Grind Foremen in yellow hi-vis jackets running from whale to whale to give the death blow with a spinal lance before someone else then cuts the neck – many do not die instantly but bleed out in the shallow water, sometimes thrashing their tails.

Sea Shepherd crew in Vestmanna have counted 94 long finned pilot whales killed in today's grindadrap hunt, including 4 calves and at least 5 pregnant whales. This grindadrap hunt involved over 5 hours of Faroese boats harrassing and chasing the pod -and the killing took around 12 minutes with the stressed and exhausted pilot whales of all ages being killed indiscriminately in front of their family members until all were left silent on the blood red sands of Vestmanna. Read more about our campaign by searching Facebook for “Sea Shepherd Faroe Islands Campaign”.

You are surrounded by laughing, shouting, screaming and splashing whilst the water underneath your feet is turning red with the blood of these beautiful and innocent souls.

You hold your phone, trying not to shake so that the video is not blured. Your emotions shut down, you concentrate on the tasks you have on hand…

People approach you, try to talk to you, try to keep you from documenting but you just keep going, trying to capture the whole scene as best as you can.

Then it’s over, an entire family of long-finned pilot whales has been wiped out within 15 minutes, after a 5 hours long drive hunt.

Whilst the pilot whales are tied to the boats with their flukes you try to find out where they will bring them. You head to your car to drive over to the habour.

When you arrive you can see workers using cranes and a forklift to lay the whales down next to each other so that they can be cleaned, measured and cut open.

You can see adults, juveniles and calves being lined up next to each other…again you try to keep your emotions in check whilst walking between all these beautiful cetaceans who just have lost their lives. The smell of death hitting your nose is overwhelming. Children are running around, touching and kicking the dead bodies. Dead fetuses, some still inside their mothers or just laying on the ground. Onlookers with drink cans and bottles are standing around laughing and talking.

The next day you head back to see if you can find out what they are going to do with the remains… you arrive when they are in the process of loading the carcasses onto a truck. When the truck leaves you follow, you smell the unbearable smell of rotting flesh and have full view of the dead bodies in the lorry in front of you…

The truck stops, calls the police. When the police arrives they ask you if you intend to video the dumping of the carcasses and surprisingly they allow us to continue.

🚨#BREAKING 🚨 Happening right now – Sea Shepherd crew on the Faroe Islands are documenting the dumping of pilot whale remains, including fetuses and young, back into the ocean. Stay tuned – More details to come shortly.

At a secluded cliff the lorry and police come to a stop. The truck driver gets out and then starts to use the claw crane to unload the carcasses by moving the arm over the cliff. The police keep us back but close enough to still film and we can see the remains falling when the claw opens and then you hear how they hit the rocks of the ravine before splashing into the sea below. One load after the next is finding its final end in the underwater graveyard…gone they are all gone… it’s over… a whole family has been wiped out in front of your eyes.

And your mind still hasn’t caught up with what your eyes have witnessed. You know that you will never forget the sounds, the blood and the smell – it will remain with you, making you even more determined to do everything you can to put an end to an outdated, unnecessary, senseless and barbaric practice.

“For years, Sea Shepherd has been saying that far too many pilot whales and dolphins are being killed than can be eaten by the Faroese people.

“The Faroese mercilessly kill every dolphin that comes close to their lethal shores and they do it for sport and the proof of this has been documented once again today with the dumping of carcasses and meat into the sea.

“This horrific slaughter is a disgrace to Denmark, Europe and to humanity,” said Captain Paul Watson. 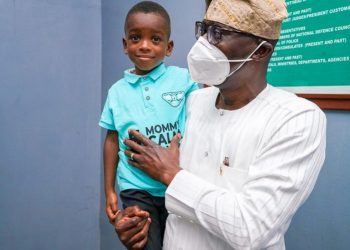