Nnamdi Kanu was merely discharged but not acquitted- Malami 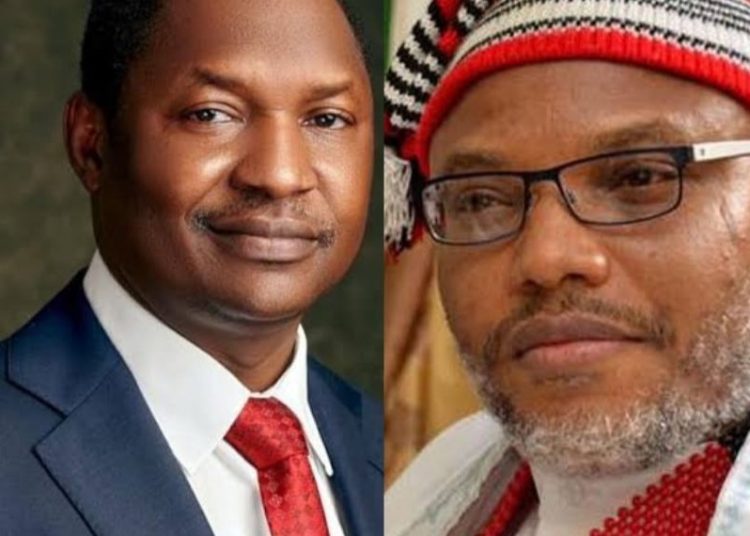 Regardless of a court ruling asking the federal government to return the leader of the Indigenous People of Biafra, IPOB, Nnamdi Kanu, to Kenya and pay him N500 million as compensation, the Attorney General of the Federation and Minister of Justice, Abubakar Malami, has maintained that he (Kanu) was merely discharged but not acquitted.

However, Kanu’s lawyer, Barrister Aloy Ejimakor, was enthused that he had been freed from charges against him,

According to the Attorney General of the Federation and Minister of Justice, Abubakar Malami, in an interview,  the IPOB leader’s rendition could not be used as the only basis to free him of other offences allegedly committed by him against the Federal Government of Nigeria.

TheNewsGuru.com (TNG) recalls that the Umuahia Division of the Federal High Court, had on Wednesday, October 26, ordered the federal government to return Kanu, to Kenya from where he was repatriated to Nigeria on June 19, 2021.

“Let me talk first of the rule of law. This is someone that has been granted bail on account of charges that have been preferred against him at the court. Someone jumping bail to the international community, a case of a fugitive is established against the background of jumping the bail.

“Two, arising from the national security, this is someone that is charged with treason, incitement and destruction of civil authority, murder and assassination of others on account of his incitement, that boil down to issues of national security and criminality.

“Three, on account of international diplomacy, this is someone that has against his person, used the international community or a foreign country to launch an attack against a nation, against his nation for that matter.

“So, all these naturally come into play to determine what to do. So, if you have through judicial processes established multiple cases of treason, homicide, bail-jumping among others; the fact that you have indeed succeeded in one case as against multiple others that are pending goes to establish the fact that that case cannot be the only basis and criteria for determining whether you are entitled to be released or not.”

The Court of Appeal sitting in Abuja, the Federal Capital Territory had earlier, upheld the appeal of the detained activist and discharged him of treason charges. Confusion however arose over the interpretation of the Abuja Appeal Court judgement.