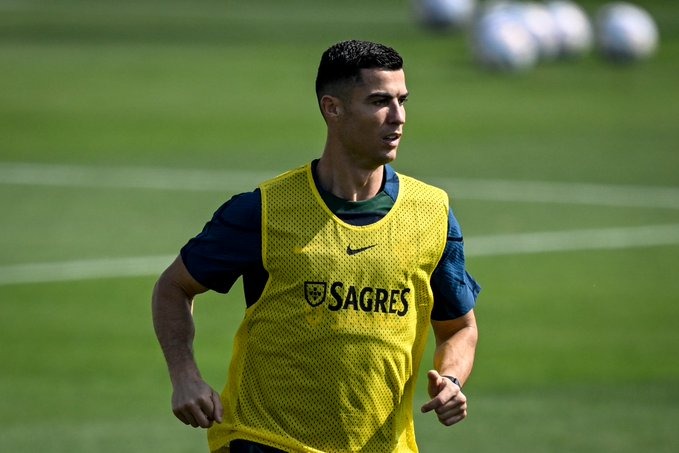 Recall that the 37-year-old footballer had his Manchester United contract terminated earlier this month after his controversial statements in a TV interview with Piers Morgan,

Saudi Arabian giants Al Nassr have offered a contract worth £186million over three years to the iconic Portuguese striker, according to a report from CBS Sports.

TheNewsGuru.com (TNG) reports that the monstrous contract is to entice Ronaldo to make the switch to the Middle East, but the player is still evaluating the options available to him in Europe.

Al-Nassr is one of the most successful clubs in Saudi Arabia, having been crowned winners of the country’s top flight nine times, with their most recent triumph coming in 2019.

Ronaldo is a Portuguese professional footballer who plays as a forward and captains the Portugal national team. He is currently a free agent.

Widely regarded as one of the greatest players of all time, Ronaldo has won five Ballon d’Or awards[note and four European Golden Shoes, the most by a European player.

He has won 32 trophies in his career, including seven league titles, five UEFA Champions Leagues, and the UEFA European Championship.

He is one of the few players to have made over 1,100 professional career appearances, and has scored over 800 official senior career goals for club and country. He is the only male player to score in five World Cup tournaments.

Ronaldo began his senior career with Sporting CP, before signing with Manchester United in 2003, at age 18, winning the FA Cup in his first season.

He would also go on to win three consecutive Premier League titles, the Champions League and the FIFA Club World Cup; at age 23, he won his first Ballon d’Or. Ronaldo was the subject of the then-most expensive association football transfer when he signed for Real Madrid in 2009 in a transfer worth €94 million (£80 million), where he won 15 trophies, including two La Liga titles, two Copa del Rey, and four Champions Leagues, and became the club’s all-time top goalscorer.

He won two Serie A titles, two Supercoppa Italiana trophies and a Coppa Italia, before returning to Manchester United in 2021. He left in 2022.

Ronaldo made his international debut for Portugal in 2003 at the age of 18 and has since earned over 190 caps, making him Portugal’s most-capped player. With more than 100 goals at international level, he is also the nation’s all-time top goalscorer. Ronaldo has played in and scored at 11 major tournaments; he scored his first international goal at Euro 2004, where he helped Portugal reach the final.

He assumed captaincy of the national team in July 2008. In 2015, Ronaldo was named the best Portuguese player of all time by the Portuguese Football Federation. The following year, he led Portugal to their first major tournament title at Euro 2016, and received the Silver Boot as the second-highest goalscorer of the tournament.

Ronaldo also led them to victory in the inaugural UEFA Nations League in 2019, receiving the top scorer award in the finals, and later received the Golden Boot as top scorer of Euro 2020.

Time included him on their list of the 100 most influential people in the world in 2014. He is the first footballer and the third sportsman to earn US$1 billion in his career.