by Ediri Oyibo
in Nigeria, Top Story
Reading Time: 5 mins read
A A
0 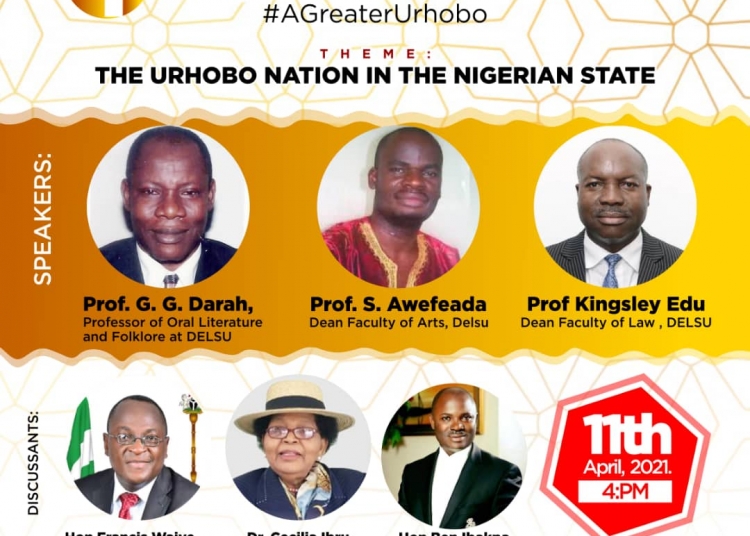 The Urhobo Global Webinar Group has announced a global webinar to dissect current challenges facing the Urhobo nation in particular, and Nigeria at large.

TheNewsGuru.com (TNG) reports the webinar is tagged Urhobo Nation and the Nigerian State.

According to a statement by Prince Randolph ErumaGborie, Chairman Organizing Committee, For Urhobo Webinar Group, the global webinar will hold at 4 pm on the 11th of April 2021.

Prince ErumaGborie in the statement encouraged all Urhobo sons and daughters to attend the webinar by registering at http://bit.ly/317BUt2.

The statement reads: “The ‘Urhobo Nation and the Nigerian State’ as the theme of the forthcoming Global Webinar of the Urhobo Nation under the auspices of the Urhobo Webinar Group schedule to hold at 4 pm on the 11th of April 2021 with attendance via zoom upon registration is being put together to articulate a forward-looking agenda for the Urhobo Nation.

“An intellectual College of Speakers comprised of Prof G. G. Darah, Prof. S. Awefeada and Prof. Kingsley Edu is in place to lead this discussion and will be ably supported by a panel of Discussants made up of worthy representation from our political class in the Honorable Members of House of Representatives in Hon. Francis Waive APC and Hon Ben Ibakpa PDP together with Dr. Cecilia Ibru OFR with her vast experience and footprint in the Economy, Industry and Education.

“The challenges facing the Nigerian State today are of the kind never see before in its history. Principal of these challenges is the current parlous security situation that threatens our very existence as a country. The wanton killings and bloodletting taking place today is more than worrisome.

“The other issue of note is the all-important question of an acceptable framework that would best serve the Union of Ethnicities that make up the geographical space call Nigeria.

“Calls have gone out for the restructuring of our current political framework as represented by the 1999 Constitution; as it is not fit for purpose and stands diametrically opposed to the negotiated and earlier agreed framework for a Federal Republic of Nigeria in the 1963 Constitution.

“Another addition to these issues will be the very dire Socio – Economic realities that befall us all as a people.

“The Urhobo Nation within the context of the foregoing as a major stakeholder in the Nigeria State and as well-meaning citizens, must engage and utilize all of the resources available and at our disposal to direct and redirect the course of events toward positive outcomes.

“History is replete with references of successful engagements in the past that provide us with enough impetus to believe in the possibilities that the future holds for the Urhobo Nation despite the current realities.

“Few examples are worthy of mentioning. Our Pre-Colonial experience clearly indicated that the Treaties of relationships with our peoples designated in those documents as ‘Sobo Country’ were entered into as sovereign and equals with the British Empire in the late 1800s.

“Further developments that violated the terms of these Treaties in the subsequent establishment of the Colonial Administration following the creation of both the Northern and Southern Protectorates and the eventual amalgamation in 1914; were resisted by the Urhobo Nation in the Poll Tax Protest of late 1920s which was among the earliest of its kind as precursor to the struggle for Independence for the Nigerian State.

“Furthermore, and from the internal perspective, the challenge of legal representation became clear and seemed pivotal to the progressive agenda of the Urhobo Nation.

“This was taken to task and the outcome was the massive investment in the training of lawyers leading to the domination of the legal practice space of both the Bar and the Bench with Justice Ayo Irikefe becoming the Chief Justice of Nigeria and others such as Justice Ovie-Whiskey becoming the Head of the Electoral Body FEDECO with numerous SANs in Akpofure, Mudiaga Odje, Akpojaro, Akpomudje etc.

“Memories of the return of 3 lawyers of Barristers Edu, Niemogha and Agore in Effurun Uvwie in the early 1970s having completed their studies in England is the proud background to the realities of today Honorable Minister of State Festus Keyamo SAN and Prof. Joe Abugu SAN both of Uvwie Kingdom.

“It is worthy of note to mention that in dealing with the legal challenge, the general understanding by the leadership of Urhobo Nation is to invest in Education under the auspices of the Urhobo Progress Union (UPU) then headed by the illustrious Chief Mukoro Mowoe.

“This led to the establishment of Urhobo College Effurun in 1949 which was carried out meticulously in the training of Mr Ejiafe in England who became the first Principal of the School built by contributions from all Urhobos on the Land donated by the Arigbe Family of Uvwie.

“The Spirit of Industry is integral with the Urhobos. Diverse economic investments by a legion of entrepreneurs were the lot of the Urhobo Nation.

“From the production of cash crops and food sufficiency in food crops both at before, through and post-colonial era to the business acumen of the Business Colossus Olorogun Michael Ibru with the Mitchel Farms and Pepsi Bottling Plant at Mosogar and the Fisheries literally feeding Nigeria and Skol Breweries at Agbarho-tor, or Sparking Breweries in Ughelli by Chief Olori, and also the Fisheries of Chief Mosheshe just to mention a few; typifies the extra-ordinary economic strides of the Urhobo Nation.

“It will interest you to note that the Urhobo people had little dependence on Government for employment and contracts as it is right to say it was only until Governor Ibori tenor in office from 1999 that a lot of Urhobos saw a letter headed contract of Government for the first time – reason for his entrenched popularity with his people.

“From the natural endowment perspective, the presence of Oil and Gas in addition to the arable land that supported the cash crops of Rubber, Cocoa, Kola Nuts and Palm Oil as well as diverse Food Crops provide for a very richly empowered and resource endowed people.

“Today the Crude Oil from our Land has continued to support massively the development of the Nigerian State in terms of providing the Foreign Exchange and funds for development.

“The Gas from our massive Gas Fields have continued to provide Power for Nigeria with the Utorogun Gas Plant as the biggest of its kind in Nigeria.

“Future development of Northern Nigeria is designed to take Gas from our land.

“Unfortunately, the necessary institutions of Government of Delta Steel Complex DSC Aladja and the NNPC Refinery and Petrochemical Company at Ekpan Uvwie and the Nigerian Ports in Warri are all comatose.

“Not to forget the very negative environmental impact of the exploitation of Crude Oil in our land has visited on our people – there are these notorious gas flare sites somewhere in Ekakpamre and Amukpe that have been on for decades.

“Today this highly industrious and endowed people are on their knees, beggarly, poor and destitute.

“Just as in the past, the Urhobo Nation is able to again rise up to the current challenges.

“This Webinar will seek to provide templates for dealing with among other issues the listed challenges of Security, Restructuring of Nigeria and Our Economy.

“All Urhobos are required and requested to attend by registering at http://bit.ly/317BUt2.”