by Utebor Paul
in Trending Video
0 Workers of the Lagos State Management Waste Authority (LAWMA) from 66 routes of operations protested and quit their jobs in demonstration against their two months unpaid salaries.

At the weekend, a peaceful protest was earlier led by the LAWMA contractor, Mrs. Ola Williams, popularly known as Iron Lady, held at the State House, Marina, Lagos, called on the new LAWMA Managing Director, Ibrahim Odumboni, to pay them their pending salaries of May and June as well as for April for some workers.

According to Williams, despite giving in their best in discharging their duties as sweepers of the state, even during the lockdown, those manning the 66 routes under her care from the 673 routes in Lagos are being maltreated.

“We are not treated well. Why would the 66 routes under my care be neglected? They are widows, single mothers and the aged, and left without money to care for themselves.

“We will go nowhere. We must get our salaries. I am ready to die for my people,” she protested. 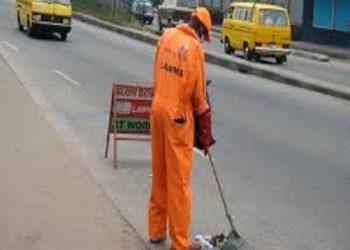