UN Secretary-General António Guterres has decried the existence of racism in the organisation.

He indicated that the situation was ironic and worrisome, considering the fact that the organisation’s principles forbid all forms of discrimination.

Guterres spoke at the launch of “Awareness and Action”, a campaign initiated by the world body to address racism in its fold.

“Racism challenges every government, every society, and every organisation including our own.

“It’s true that we have clear rules in place that prohibit and protect staff from all forms of discrimination, including racism.

“But let’s be honest: sometimes we have been slow to acknowledge the existence of racism inside the UN.
“Let me be very clear: racism has no place in the United Nations,” Guterres told members of staff at the virtual event which originated from New York.

The UN chief noted that the organisation was founded on the principles of dignity and worth of the human person, “without distinctions of race, colour, ethnic or national origin”.

To this end, he said, the UN support member states in developing legal tools and building capacity to address racism in all its ramifications.

This, he noted, created a special responsibility for those working for the global body to examine and address the menace in the system.

“We must examine our efforts and ask ourselves if we are doing enough to combat racism and racial discrimination inside our organisation.

“The exercise we are launching today is aimed at making sure that everyone who contributes to the work of the UN feels respected and valued as an individual, and as a member of our UN family.

“We need to do better at listening to one another and acknowledging disappointment, anger and pain.

“The primary objective of the campaign is to create safe spaces for UN personnel to share their experiences and perspectives in a respectful and supportive environment.

“The campaign aims to raise awareness of the various ways in which racism manifests itself in our workplace.

“It also seeks to encourage all colleagues to speak up and take action against racism and discrimination in all its forms,” Guterres said.

He explained that the campaign would feature a series of dialogues to be led by different UN duty stations around the world.

Guterres said leaders and experts from the UN system, civil society and the private sector would participate in the discussions.

According to him, the exercise will consider the different facets of racism, and how the organisation can strengthen its culture to better prevent and respond to menace. 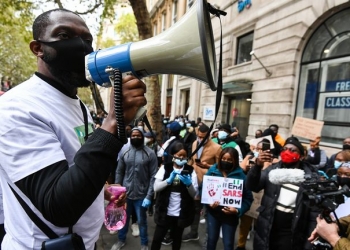 UN picks Nigerian for woman police of the year award

Get approval before using corps members’ uniform in movies — NYSC