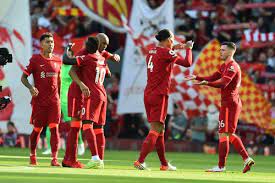 Liverpool manager, the German tactician ,  coach Jurgen Klopp, has said they will not celebrate massively  if they beat Chelsea in the FA Cup final, because of their bid to win a historic Quadruple this season.

Recall that Liverpool defeated Chelsea 11-10 on penalties to win the first major trophy of the season at the Wembley stadium in February.

Liverpool will be praying that Manchester City  faulters in their two remaining matches for the hopes of winning the historic quadruple.

Klopp’s men are still on the quest to win all four trophies, as they chase Manchester City in the Premier League title race and face Real Madrid in the Champions League final.

“When you go for three or four trophies, it’s clear you get it or you don’t,” Klopp told a news conference on Friday.

2023: Kano Governor Ganduje visits Shekarau to stop him from defecting to NNPP

Man gets life in prison, plus 45 years, in beheading case

Cross-Border Fraud: How To Protect Yourself - Cyber Security analyst,Ben Allen