After losing the African Democratic Congress (ADC) presidential ticket, Prof. Kingsley Moghalu, says he has opted out of the 2023 ...

Presidential candidate of the ruling All Progressives Congress (APC) for the 2023 general election, Bola Tinubu has said he is ...

The Independent National Electoral Commission (INEC), has published the particulars of some candidates nominated by political parties for the 2023 ... 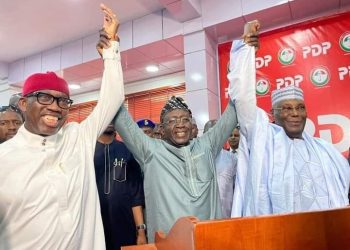 Running mate: It was difficult deciding on Okowa – Atiku Abubakar

Presidential candidate of the People's Democratic Party (PDP), Atiku Abubakar has said it was difficult deciding on Governor Ifeanyi Okowa ...

Delta State Governor Ifeanyi Okowa has pledged to join hands with the presidential candidate of the People's Democratic Party (PDP), ...

2023: My VP’ll come from North East, particularly a Christian – Tinubu

Presidential candidate of the ruling All Progressives Congress (APC) for the 2023 general elections, Bola Tinubu has said his running ...

APC urged to narrow search for 2023 VP to Northern Christian

The All Progressives Congress (APC) National Stakeholders have called on the party’s leadership to narrow the search for its 2023 ...

Take aways from the presidential nominations – By Dakuku Peterside

After a long voyage , all the political parties have concluded their special conventions and primaries, and they now have ...

Tinubu: Back Story and the Morning After – By Azu Ishiekwene

After the feisty, if not bitter, presidential primary of the ruling All Progressives Congress (APC) ended on Wednesday with Asiwaju ...

Former Deputy Governor of the Central Bank of Nigeria (CBN), Kingsley Moghalu has reacted after losing the presidential ticket of ...