by Ediri Oyibo
in Africa, News
Reading Time: 2 mins read
A A
0 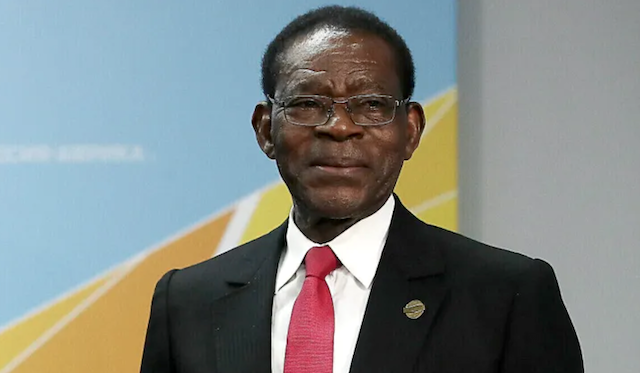 President Teodoro Obiang Nguema Mbasogo has won a sixth term in office, a much-expected result in an authoritarian country with next to no political opposition.

The 80-year-old has been in power for 43 years — the longest rule of any leader alive in the world today except monarchs.

During his election campaign in 2009, Obiang promised “social housing for all” in the oil-rich central African state.

Obiang planned to provide enough housing to raise Malabo’s shanty towns, including Nubili, a mass of tin-roofed shacks along narrow paths that is home to thousands of families in the heart of the city.

Since, some 20,000 housing projects have sprung up in the country of around 1.5 million residents.

But sitting outside his shack in Nubili, 70-year-old Julio Ondo said none of them appeared to be for people like him.

“They’ve made fools of the poor,” he said. I’ve lost all hope of one day living in “dignified housing”.

Most people live in poverty in Equatorial Guinea, the World Bank estimates, while wealth is concentrated in the hands of just a few families.

In some parts of Malabo today, lines of identical apartment blocks have sprung up as far as the eye can see, built with the profits of high international oil prices.

In the suburb of Buena Esperanza, some 2,300 small detached homes appeared during the 2010s, supposed to welcome families from Nubili.

But today, shiny four-wheel drives and other expensive cars line the neighbourhood’s streets, appearing to indicate the wealth of its new residents.

But that is astronomical for many in Nubili.

Plantain farmer Antonio Omecha, 72, is one of many who had hoped the housing plan would allow him to leave a slum plagued with disease and frequent fires.

He said he did receive a housing coupon to go and live in Buena Esperanza.

It was impossible on his monthly income of $30.

His neighbour Tobias Ondo, 65, said the new homes were simply too expensive.

“Do you really think someone who works seven days and barely makes 2,000 francs can afford to own such a home?” he said.

“I’ll be dead before I go and live in the public housing promised by the president.”

Equatorial Guinea is the region’s third richest country, with a GDP per capita of $8,462 last year, after the Seychelles and Mauritius, the World Bank says.

But in 2006, when the oil boom was in full swing, more than three quarters of the population lived in “extreme poverty”, or on less than $1.90 a day, the international financial body said. There have been no new figures since.

The country ranked 172 out of 180 in Transparency International’s 2021 Corruption Perceptions Index.

During his election campaign at the start of the month, Obiang admitted that social housing intended for “people without great means” had been snapped up instead by “people able to build their own home”.

But he did not offer a solution.

Martinez Obiang, of micro-financing firm Atom Finances, says he thinks the homes should have cost no more than the equivalent of $780, payable in tiny monthly instalments of less than $3.

Sociologist Nsogo Eyi said the new homes, including those in Buena Esperanza, did not seem to be serving their intended purpose.

“Some powerful men have bought them to rent them out, including to expats,” he said.

AFP reached out to several of these new owners, but they refused to comment.