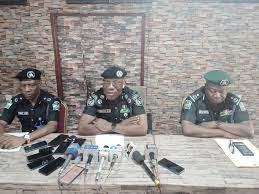 Two women and two men have been arrested by the Anambra State Police Command over alleged blackmail and stealing.

The state police spokesman, Tochukwu Ikenga, in a statement on Thursday, said the suspects used social media to lure unsuspecting men into fake love and friendships and thereafter, took the victims to a room, where one of the female suspects, Nduba, engaged them in foreplay.

Ikenga noted that in the process, other members of the gang forced their way into the room, took nude pictures and videos of the victims, and forced them to transfer huge sums of money to their accounts.

He said the suspects threatened to publish the nudes on social media if the victims failed to comply.

The personnel were intakes from Police College, Oji-river, Enugu State.

The state Commissioner of Police, CP Echeng Echeng, while addressing the recruits at the Command headquarters, Awka, said the success of police officers were dependent on the quality of their character, discipline and professionalism.

Echeng charged them not to engage in any act that was unedifying to their good names and that of the Nigeria Police Force.

He commended the Inspector-General of Police, Baba Usman, and his management team on the initiative of manpower development and deployment of these officers in line with the concept of community policing principles.

He also said with the deployment, the Command was more motivated in enhancing public safety and peace in the state.