How I ameliorated the terrible electricity situation in Southeast -Bart Nnaji

by Bartholomew Madukwe
in Energy and Power, News
Reading Time: 3 mins read
A A
0 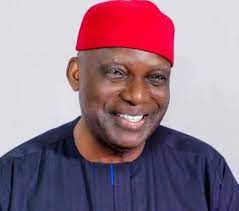 Nigeria’s former Minister of Power, Prof. Bart Nnaji, has revealed how he helped in ameliorating the terrible electricity situation in the Southeast by setting up a 188-megawatt power plant in Aba through his company, Geometric Power.

Nnaji, the chairman and CEO of Geometric Power Limited, made the disclosure on Tuesday at the 58th birthday of Abia State governor Okezie Ikpeazu in the governor’s country home, Umuoboakwa, Obingwa Local Government Area of the state.

The former minister of Power recounted an ugly experience he had when he purchased a large expanse of land in Emene, Enugu to build a company to manufacture vehicle spare parts, including auto engines, only to discover that it could not take off because of the poor electricity situation in the Southeast in particular and the country in general.

Nnaji who is also a distinguished Professor of Industrial Engineering at the University of Pittsburgh in the United States and Director of e-Design of the United States National Science Foundation, said the second reason was the request from the then Nigerian Minister of Finance, Dr Ngozi Okonjo-Iweala, now the World Trade Organisation (WTO), and the then World Bank President, Dr James Wolfohnson, to build a 50MW power plant in Aba to assist both big and small manufacturers.

He said, “They made the request in 2004 after visiting Aba and saw the enormous economic and technological potentials of this city, the headquarters of indigenous technology in Nigeria, but was being paralysed by poor electricity.

“Both Dr Okonjo-Iweala and Dr Wolfohnson asked me to consider building this power plant because a team of Nigerian engineers I led had successfully built a 22MW emergency power plant in Abuja in 2001 to supply uninterrupted electricity to the Nigerian National Petroleum Corporation headquarters in Abuja, State House, Central Bank and the Abuja Business District.

“What they didn’t know is that I was already reflecting on how I could help ameliorate the terrible electricity situation in the Southeast.”

“We can say without fear of contradiction that the request from Okonjo-Iweala and Wolfohnson was a divine intervention,” Nnaji added.

He explained that the provision of basic infrastructure like electricity in the Southeast and elsewhere in Igboland would trigger the beginning of a development miracle from which all Nigerians would benefit.

It is imperative, he stated, that the Igbo and all the people of the former Eastern Region regain the development momentum of the First Republic during which the government and people built the University of Nigeria, African Continental Bank, Nigeria Cement Company at Nkalagu in today’s Ebonyi State, the Nigersteel company, Nigergas, Hotel Presidential and many others which enabled the region to become the fastest developing place in the world in the mid-1960s.

The industrial engineering professor said that if he had located the Geometric Power plant in Ikeja Industrial Estate or Ilupeju Industrial Layout in Lagos State or in the Agbara Estate in Ogun State, he would have gotten a faster return on investment, but Igboland “which is in dire need of such infrastructure would continue to suffer.”

He paid a glowing tribute to the Nnewi people in Anambra State for resolving and successfully developing their homeland after the Nigerian civil war even without roads and electricity.

“The Nnewi initiative is an eloquent example of what the Igbo can do once they have the opportunity”, he said, charging other communities to feel challenged by Nnewi’s accomplishments.

Nnaji observed that the rapid development of Eastern Nigeria would make it unnecessary for “millions of our people to leave for Lagos, Abuja or overseas in search of better living conditions.

“I, therefore, urge all Eastern investors to start thinking home. Charity starts at home,” he added.

Other speakers at the Governor Ikpeazu 58th birthday colloquium include Mazi Sam Ohuabunwa, president of the Pharmaceutical Society of Nigeria who chaired it, former Senate President Adolph Wabara who is the acting chairman of the PDP board of Trustees, Darl Uzu, chief promoter of the Enyimba Economic City, veteran journalist Ray Ekpu and Ohaneze president, George Obiozor who was represented by an Ohaneze leader in Abia State.

Others are the president of the National Association of chambers of Agriculture, Commerce, Industry, Mining and Agriculture (NACCIMA), Ide John Udeagbala, and former Abia State House of Assembly Deputy Speaker Emeka Stanley as well as a host of traditional rulers.