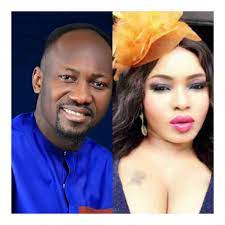 Despite the N1 billion defamation lawsuit slammed against ailing Nollywood actress, Halima Abubakar, by the senior pastor and general overseer of Omega Fire Ministries International, Apostle Johnson Suleman, the former has revealed that the clergy made love to her during menstrual cramps.

Disclosing what Apostle Suleman told her when he made love to her while bleeding, the actress, in an Instagram live session, asserted that she is not worried about the lawsuit; hence, she cannot be shushed.

She explained that she bleeds whenever Apostle Suleman made love to her which did not bother him because he does the same when she was on her period.

According to her, the clergy told her that he only does it with her and is comfortable doing it while she bled because he cannot stand it from other women. 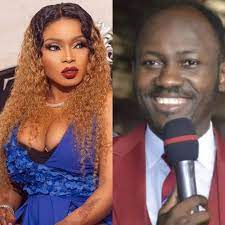 Halima further alleged that she began to have intensive dreams of the clergy and also the feeling of being made love to by a spiritual being.

Recall that last year; Halima made headlines for weeks when she accused Apostle Suleman of having an affair with her.

The actress and her family also claimed that the pastor had inflicted her with sickness, as the once bubbling Halima has become a shadow of herself. 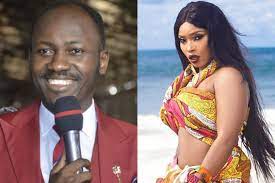 The suit titled “DEFAMATORY STATEMENTS CONCERNING APOSTLE JOHNSON SULEMAN: NOTICE TO CEASE AND DESIST” was specifically addressed to Halima Abubakar over her recent outburst on social media regarding her past affairs with the man of God.

According to the suit, Halima published damaging, malicious and defamatory statements about Apostle Suleman against his conduct.

Halima, who began acting in 2001 when she played a minor role in ‘Rejected’, said she had an affair with the preacher because he told her he was a divorcee with three children.