...says "I do not believe that it is compulsory for everyone to be married" 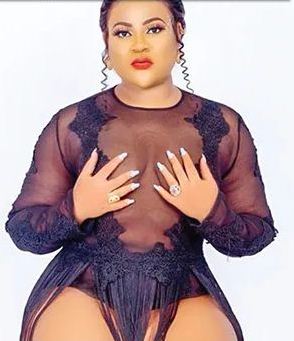 Controversial Nollywood actress, Nkechi Blessing Sunday, has hinted how she could leave the rest of her life with a man she will buy, marry and have total control over.

Blowing her own trumpet, she noted that she can comfortably buy a man with her money and control him.

She explained that the man would be under her total control as she will put him in her house and dictate how the relationship should go based on her liking.

According to the actress, she could decide not to marry because she does not believe that it is compulsory for everyone to be married.

Nkechi Blessing, who was confident with her present financial status, bragged about being able to buy any man of her preference if she so desires.

Nkechi Blessing made this claim during an Instagram live session with car dealer and mediator, Chidi Mike CMC.

She joined the live session which featured three other people apart from Chidi, with the topic of discussion being on marriage and whether it is compulsory for a woman to get married or not.

The screen diva, however, stunned everybody when she said that she could also decide to buy any man she wants with the little money that she has.

Her statement was so controversial that it even got the attention of Tonto Dikeh, another actress who loves controversy.

tontolet wrote; @chidi.mike_cars 😂😂 brotherly this one shock you😂😂😂.. I no just know where my Baby @nkechi_blessing_sunday Dey get all these LAMBA..Nke chi come buy me🥹😆😞😡🤷🏻‍♀️🤣🤣🤣🤣🤣

Also, her fans and followers were divided in their opinion-sharing.

candidfox; Abeg make she shift.. The men she can buy are the ones that have no class.

mayor_60; Lol😂 he will come and take the little you have and still leave you so calm down.

wealth_nation01; CMC Sorry I don’t know what you’re trying to promote with this your post.

charlesdonennadi; Depends the kind of man you want to buy some men get level and you can’t buy them no matter how much in your account E get why.

karensugar35; I swear this lady no dey think before talking 😂😂😂😂. Las las everyone will fine.

okorojuniort; All I see is a woman still nursing her heartbreak 💔,take time from social media and heal.

pos_david7; How much you get way you one buy man ,will that buy happiness also abeg.

imwillboy; Na em you never buy new pant since Weldon auntie if clout was a person.

official_asilo; What nonsense is dis woman talking abt 😂😂how much you get.

zansi_fo_sho1; How much you get self aunty Nkechi 😂you talk too much.

prettywomancouture :No be every come this life say the wan marry”. Hmmmm but how come you come the form married with your ex, when you were not married?.

In 2016, Omoge Lekki won MAYA Awards and she was nominated for Revelation of the Year at Best of Nollywood Awards.

She also serves as the Director and chief executive officer of Nkechi films production, and NBS Foundation.