by Kehinde Ajose
in Entertainment, Lifestyle
Reading Time: 1 min read
A A
0 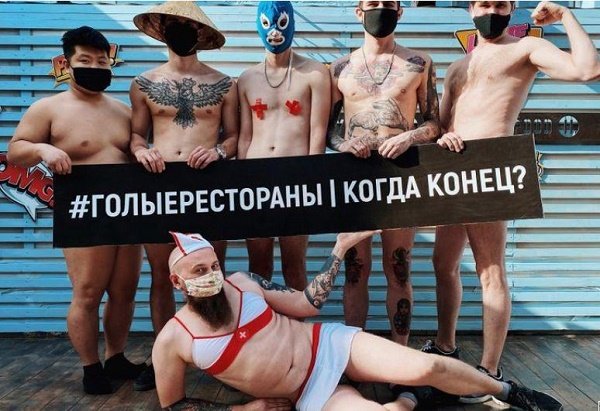 Russian restaurant owners, whose income dropped due to the COVID-19 lockdown, have campaigned to reopen shops by posting photos of themselves naked on social media.

On Tuesday, pictures of residents said to be owners of bars, restaurants, and cafe employees, with carefully positioned plates, saucepans, bottles, and napkins, circulated on social media platforms.

Reuters report that the group demanded that the Russian authorities allow them to start serving clients as the country gradually eases measures to stop the spread of the novel virus.

Putin had ordered firm lockdown measures at the end of March — a directive that shut businesses except for food stores, pharmacies, although regions were conditionally allowed some adjustment.

But the country would on Monday declare that it would lift a range of anti-coronavirus measures including a strict lockdown on Moscow, despite still recording thousands of new cases.

While this would allow residents to travel freely for the first time since March, it was gathered that authorities in some cities including Novosibirsk had yet to say when restaurants can open.

“We are naked because we are left with nothing,” Arthur Galaychyuk, owner of the Relab Family bar chain in the city of Kazan, whose 20 employees took part in the campaign, reportedly said.

A chef known as Pavel from the Siberian city of Novosibirsk added: “We don’t want to stage a strip show or to fool around, we only want one thing to work!

“We don’t pose more of a risk then supermarkets, shopping malls, hair salons, or public transport.”

Ever since Russia’s first case of COVID-19, the country has so far recorded above 450,000 cases and over 6,100 deaths, according to worldometres.