by Emman Ovuakporie
in Entertainment
Reading Time: 4 mins read
A A
0 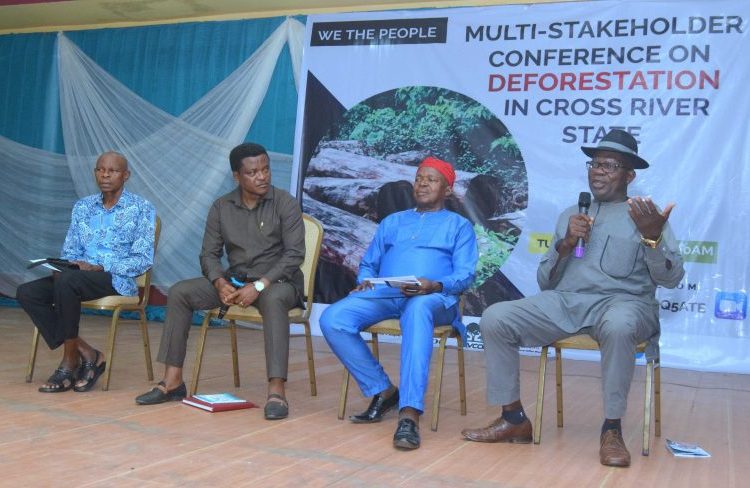 Disturbed by the high rate of destruction of the forest estates by “armed forest bandits”, critical stakeholders have blamed the Cross River State government and highly placed citizens of the state for deforestation.

They stated this during a Multi-Stakeholders Conference with focus on ending ‘Deforestation in Cross River’ organized by We The People (WTP) in partnership with the Rainforest Resource and Development Centre (RRDC) held at the Kolanut event Centre in Calabar.

They said lack of political will, non-implementation of laws and policies are some of the factors of deforestation in the state.

In his welcome speech, the Executive Directors of WTP, Ken Henshaw said of the remaining 10 percent of Nigeria’s forest cover, Cross River has the largest with total forest cover of 7, 920 square kilometers in 1991,but sadly, between that time to date, the rate of deforestation has increased drastically on account of illegal logging and agricultural activities.

Ken lamented that despite ban on all forms of logging activities placed by the State Government 14 years ago, “at the moment, logging activities are taking a sinister dimension in Cross River State, we have also seen that the actions of Cross River State Government in the last one and a half decade have intensified the destruction of the rain forest.”

In his welcome speech, Executive Director, RRDC, Odey Oyama, said the event was intended to brainstorm on the ongoing wanton destruction of the state forest estates and how to proffer solutions to salvage the remaining forest cover.

He said preliminary field survey carried out by the organizers of the conference revealed what he described as severe destruction of the forest estates by armed forest bandits despite government’s ban on all forms of logging activities in the state.

He disclosed, “ our findings have confirmed that large scale Tropical High Forest Timber are increasingly being logged illegally, day and night, resulting in extensive eradication of the remaining pristine rainforest in the state.

“ it is the desire of this conference to therefore to draw attention to the extensive loss of financial benefits that this means to our communities and government, in the form of compensations, royalties, taxes as well as loss of employment opportunities, destruction of the resources of food security and gross aggravation of poverty.”

He said their findings also revealed that the unsustainable logging operations are not only conducted in defiance of the ban declared by the state government but in particular, it violates the prescription of the Environmental Impact Assessment (EIA) law.

He however frowned at what he refered to as negligence and complacent by the Cross River Forest Commission, adding that the organisers of the conference had in many instance reported forest illegalities and crimes to the commission but did not get any corresponding response.

“The commission would rather maintain a conspiracy of silence than wake up to its duties.” Odey faulted.

Presenting a keynote address at the conference, former Chairman of Cross River State Forestry Commission, Dr. Odigha Odigha said Cross River must have a leadership that has the political will to wrestle deforestation of forest estates like what the state had during the administrations of Donald Duke and Liyel Imoke.

He said, “We are faced with the most serious crisis of our life, we are faced with deforestation, it is the truth that will save us from where we are. Hopefully by the grace of God, all things being equal, by 29th of May 2023, we will have a new administration; hopefully we will breathe some fresh air.”

According to him, for that to happen, stakeholders in the sector must spare head the change and chat a new cause to recover the state and its resources.

The Environmentalist adding, “we should also look at whatever policies and regulations that we have. I think we have a good law, a good policy but implementation is the issue and of cause the third issue is, there must be budget provision or something to fund this sector.”

Odigha advised that deliberate effort should be made to set aside funding for the protection of the forest.

In the same vain, Professor of Ecological Architecture and Sustainable Urbanism, University of Cross River ( UNICROSS),Prof. Ekpenyong Itam in his lecture on ‘Policy frameworks on Forest Management in Cross River’, expressed the need to implement existing policies and laws that guide the sector.

He also opined that to protect the forest, stakeholders should fund the process with the ecological fund, adding that armed forces, like the civil defence should be used to protect forests in place of the regular taskforce.

He stated, “we are using obsolete policies to match the current situation, our policies must change, with what government called taskforce, we won’t be able to protect the forest we should rather depend on those forces that carry arms, we must not depend on them on voluntary grounds, we must fund them so that they can deliver.”

He blamed the fast deforestation of Boki and other forests in Cross River to change in government.

“I am a serving chairman in APC, if there is no guarantee that the next APC governor will protect our forest I have no business voting them because this thing begins and ends on the desk of the Chief Security Officer of this state. Ewa stated.”

Speaking on ‘Drivers and Pattern of Deforestation in Cross River State a lecturer and researcher at the University of Calabar, Dr. Raphel Offiong , identified greed among elites, poverty, weak traditional institutions as drivers of deforestation.

In the community panel discussion session moderated by Dr. Martins Egot, the Chiefs called on the state government to introduce empowering programmes to youths living in the communities. They said training and awareness creation are also ways to keep the youths away from illegal logging activities. 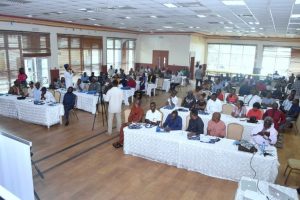 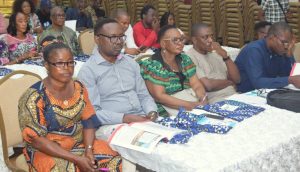 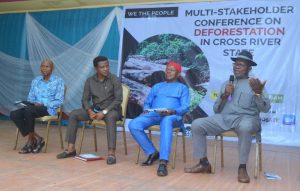