Hours after announcing the end of his 7-years-old marriage to actress Funke Akindele, Abdul Bello, a.k.a JJC Skills has consoled himself with BurnaBoy’s heartbreak song, ‘last last’.

JJC Skills who admitted that the marriage has been having issues for two years, confirmed that Funke asked him to leave her house and has refused any form of amicable communication with him.

According to him, their marriage is now beyond repairs and he is looking at how they can co parent with ease and manage their joint business.

The heartbroken father Following his announcement, took to Instastories to console himself with Burna Boy hit song ‘last last’, which is about heartbreak.

Sharing the song, JJC made a post saying that he will be ok, but it might not be today or tomorrow. 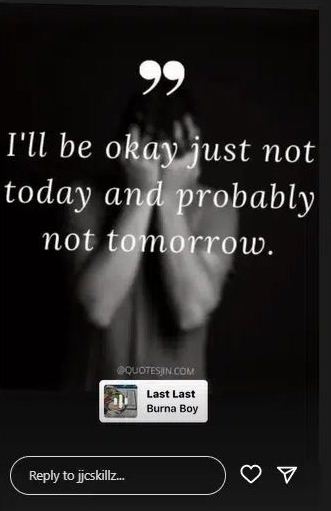 TheNewsGuru.com (TNG) earlier reported that JJC Skillz announced his separation from his wife, Funke, on Thursday.

In a post on his Instagram page, JJC Skillz said he moved out of the house three months ago and that they had been leading separate lives.

“Dear Friends and family, I need to let you know that Funke and I have separated. While it lasted we shared a lot of things together and have created 2 beautiful children.

“The last two years have been extremely difficult for us. I know I have tried my best to fix things but I believe it is beyond repair now.

“Three months ago and at Funke’s insistence, I moved out of the house and apart from AMVCA have not been able to get Funke to sit down in an amicable manner to discuss the future of our relationship.

“We still have issues that need to be addressed such as the custody and well-being of our children which is paramount as well as business interests which need to be disentangled but I have no doubt that these will be resolved one way or the other,” JJC Skillz wrote.