by Bartholomew Madukwe
in Entertainment, Trending
Reading Time: 1 min read
A A
0 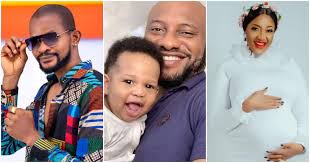 Nollywood Actor, Uche Maduagwu has berated his colleague and 2023 presidential aspirant, Yul Edochie, for marrying two wives as a Christian, querying “are you still a Christian?”

This followed as Yul, on Wednesday, introduced his son from a second wife, Judy Austin, who also is a Nollywood actress.

According to Uche, the 2023 presidential aspirant should first build his home before talking about becoming a president.

Yul has made his political ambition known for a long time and most youths had supported him, following calls for a youth president in Nigeria.

Uche noted that it seems there is trouble in Yul’s family, stressing that he just “made it public that he was cheating on his wife”.

In his statement, Uche pointed out that it is an abomination for a Christian to take two wives and the news broke him.

Maduagwu further added that Yul’s first wife, May has a right to take him to court except he has turned into a Muslin or traditionalist.

He then advised his colleague to build his home before he dreams of becoming president.

He stated: “OMG THIS MADE ME CRY LIKE IKEBE FC AMBASSADORS, BROS, ARE YOU STILL A CHRISTIAN OR YOU DON TURN TRADITIONALIST OR MUSLIM, BECAUSE THERE IS NO WHERE FOR CHRISTIANITY WEY MAN DEY MARRY TWO WIVES, SO IF THE RUMOR IS TRUE YOUR LEGITIMATE WIFE FIT CARRY YOU GO ILE EJO.”

Flying Eagles head to Niamey for WAFU B Championship