..."Lyon" pouring out his soul during worship in church (Photo) 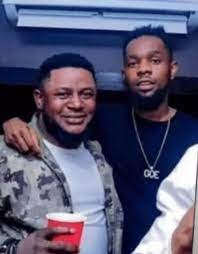 It would be recalled that the Bayelsa State Police Command on Monday paraded the suspected kidnap kingpin.

He was paraded alongside three other members of his kidnapping gang at the Police Officers’ Mess in Yenagoa.

Lyon was apprehended by a crack team of detectives from the command who tracked him to Abuja.

In a viral video when he was caught, he cried openly that he had a wife who recently put to bed.

Prior to his arrest, the former banker was also seen in a photograph with security personnel and in a church setting praying.

Reacting to the singer’s photo with Lyon, fans of Patoranking appreciated God on his behalf for not being one of Lion’s victims.

Following his arrest, multiple photos of the kidnapper from his normal life surfaced; one of which included an intense worship session in church.

TheNewsGuru.com reports that the Bayelsa indigene who flaunts his wealth online, met his waterloo in the hands of the police during his last operation in Abuja.

Following news of his arrest, a photo of him pouring out his soul during worship at a church service has been shared online by a popular Twitter influencer, Doctor Penking.

Penking stated that those who go to church to look for “God Fearing Men”, should know that the church is just like a hospital and not everyone is responding to treatment.

He tweeted; “For those of you who go to church to look for “God Fearing Man”, be aware that the church is just like the hospital.-Not everyone is responding to treatment. Crying during worship doesn’t make someone holy. This is Lyon the Kidnapper who tortures, maims and kills Nigerians.”

iykemama_
His enjoyment continues in jail😂😂😂