by Olaotan Falade
in Entertainment, Trending
511 16
0 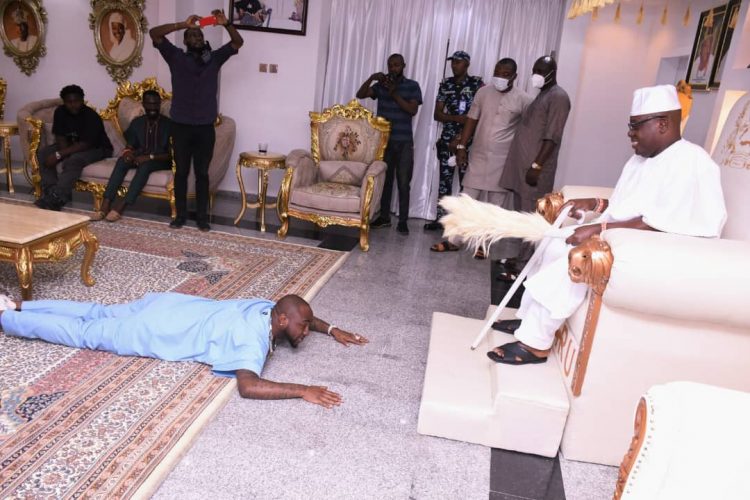 211
SHARES
5.3k
VIEWS
Share on WhatsAppShare on FacebookShare on TwitterShare on LinkedInShare on TelegramSend as Email

Davido visited the new monarch in company of son of the National leader of the All Progressives Congress, APC, Seyi Tinubu.

During the visit, the music star prostrated to greet Oba Lawal and his wife, Mariam in respect for traditional culture of the Yoruba people.

According to Oba Lawal, who shared photos of the visit on his twitter handle on Tuesday, he was pleased to host the Davido, a talented and sensational young man.

He said he was very pleased with the conversation he held with him on the prospects and possibilities for tourism.

“My lovely Olori, Mariam  and I were pleased to receive the very talented and sensational Davido as well as Seyi Tinubu yesterday. I was very pleased with our conversations and the prospects and possibilities for Tourism.

“Keep your fingers crossed for a collaboration to take Iru to greater heights. Meanwhile, I hope you have registered for the Sustainable Cities (aka Olokun) Dialogue this Friday. I’ll love to see you there,” he wrote on his twitter handle.

Davido, during the visit

Davido during the visit