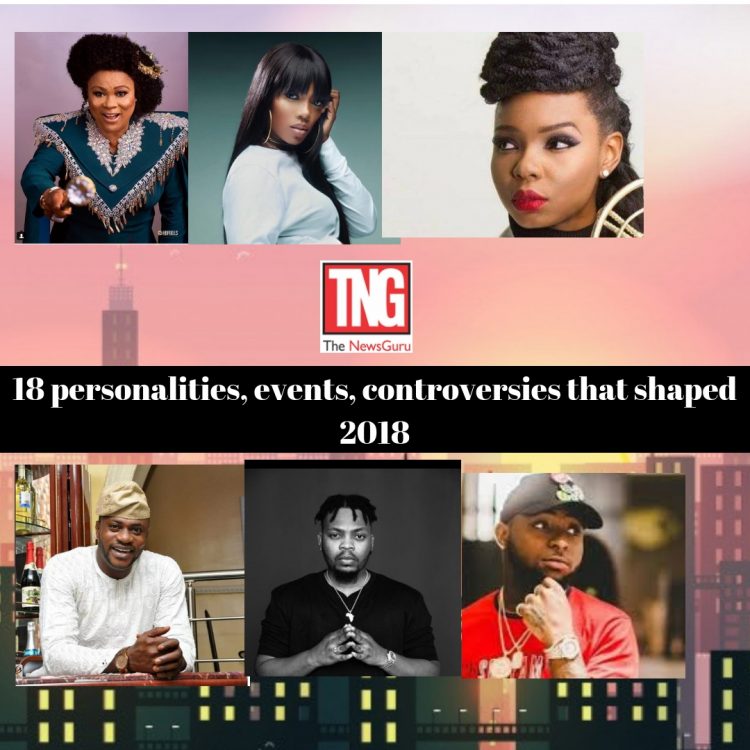 2018 has indeed been an eventful year in the Nigerian entertainment sector. From success stories to tragic occurrences, the year hasn’t been devoid of the good, bad and ugly.

In no particular order, TNG takes a look at 18 personalities, events and controversies that shaped 2018

Tiwa Savage would probably make the list of everything related to music in 2018.

From her single ‘Lova Lova’ featuring Duncan Mighty which according to her, is the biggest song of her career to her 2017 song ‘Malo’ which hit over 20 million YouTube views in 2018,  she sure has many wins to celebrate in 2018.

This year, the ‘Johnny’ crooner went on a tour of Europe  that saw her and her band hold successful concerts in major cities including selling out the 1,500 capacity Melkweg centre in Amsterdam, Netherlands.

At the 2018 edition of Essence Street Style Festival held in Brooklyn, Yemi was one of the headlining acts performing alongside  Teyana Taylor.

The dancehall singer became a father in July after the birth of his first son.

Beautiful actress, Yvonne Jegede had her life change when she welcomed her baby  in faraway United States of America.Many of her fans and the media didn’t  know about her pregnancy.

Sensational actress and comedienne,  Funke Akindele-Bello delivered a set of twins in December. Her social media page was on fire with congratulatory messages over the last weekend.

Popular Nigerian media personality, singer and writer, Tosyn Bucknor passed on the 19th of December 2018. The deceased was  reportedly found dead by her husband, Aurelien Boyer, when he arrived at home from work. The news was confirmed by her former colleague at Top Radio, Wale Adigun, via his Twitter account

We won’t forget in a hurry the war of words between Juliet Ibrahim and Nkechi Blessing. The talented actresses lashed out on each other over a slap Arole gave to Nkechi during the shoot of a movie.

Nkechi uploaded a video on her Instagram page which triggered the feud.

In the video, she was captured being slapped by Nigerian comedian,  Arole. Nkechi however called on the director of the movie to cut the scene because the slap was too intense.

Juliet Ibrahim, via a comment on Nkechi’s page, noted that telling the director to end the scene isn’t professional.

This resulted into an intense exchange of words between the two role interpreters which began yesterday. 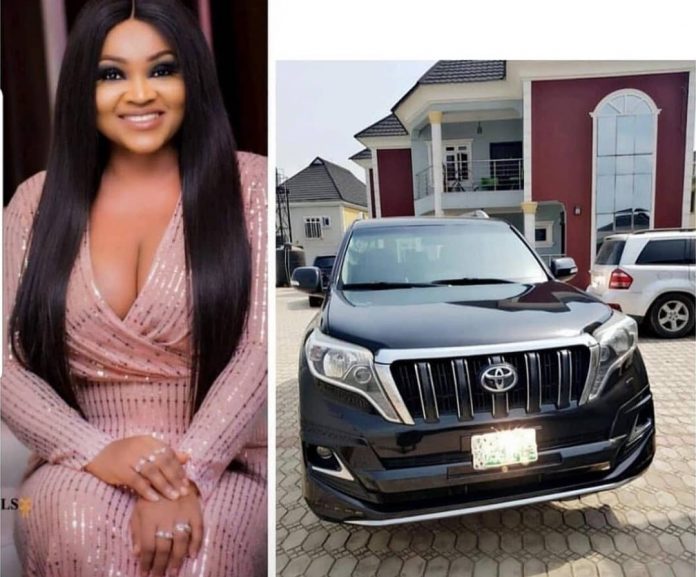 In 2018, the fashionable Edo State born actress, Mercy Aigbe  got enmeshed in one social media trouble or the other. The beautiful role interpreter was in the news recently when it was speculated that her new mansion was gifted by a governor.

Reacting over the claims, an angry Aigbe wrote:” Dear Bloggers, the mumu upcoming script writer! and association of instablog bad belle, jobless commentators….this house you see in this picture was bought with my hard work and God’s grace( not that I owe y’all an explanation)……..since you have taken it upon yourselves to be in my business, pls employ a very good private investigator, a pastor, an Alfa or a Babalawo to help you in further investigations….so you won’t be peddling stupid rumours that has no iota of truth in it!….let me quickly warn you that more is coming oh!!! Because something HUGE is cooking  . I am just getting started”.

Nollywood comic actor ,Imeh Bishop this year was exposed over allegedly demanding sex from a prostitute. A chat he had with the hooker surfaced online .In the conversation, the lady accused the actor of pestering her for sex.

The veteran actress has proven times without number that age is no excuse to remain redundant. Many won’t forget in a hurry the role of Alhaja Eniola Salami she played in the movie ‘King of Boys’.

In ‘King of Boys’, Sobowale combined her trade mark authenticity, energy and unrivaled depth needed as a ruler of the underworld striving to win political battles in the movie.

The Nigerian legendary music icon passed on in June at the age of 60 .

According to reports,the musician had slumped at the Murtala Muhammed International Airport, Lagos while waiting to board a flight to the United States. Sadly, his wife died about three months after his demise. 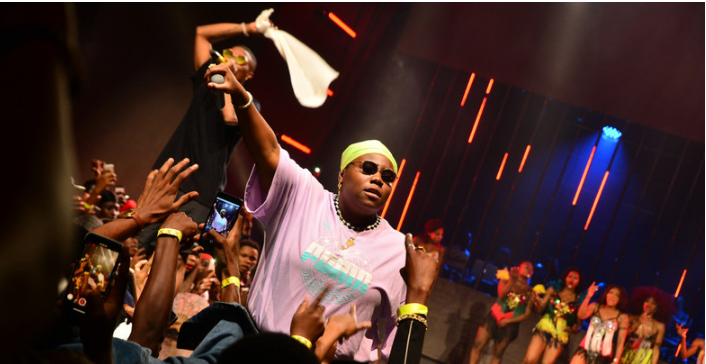 From being a melodious vocalist with that tomboyish mien, Teni has become more than just a talented singer. She has morphed into a social media sensation. Her groovy song, ‘Askamaya’ currently has over 2m views on YouTube. In addition, ‘Case’ a song she just released in less than two months has already become a street anthem, garnering more than a millon views on YouTube.

This year Odunlade remained on top of his game. He appeared in more movies, signed endorsement deals, won the AMVCA and continued to blossom in his career.

Talent aside, Davido is one of the most enterprising Nigerian artistes of his generation. The Afro-pop star continues to blaze the trail in his music career with groovy tunes. His melodious Afro-pop song, ‘Assurance’ dedicated to his girlfriend, Chioma has  over 30m YouTube views as at the time of  filing this report.

We won’t forget  any time soon the storm created by Wizkid and Tiwa Savage after Wizzy released the visuals for his song ’Fever’.

The provocative video features pop star, Tiwa Savage who doubles as a sexy vixen and the Star boy’s love interest.

From lustful stares and near-kiss scenarios, the chemistry between Wizzy and Tiwa was just palpable in the visuals, making their fans speculate that there may just be more to their relationship than the musical synergy they share.

Burna Boy sure outdid himself this year with his sequence of hit songs released back to back. This aided the singer’s ‘Outside’ album  which was released to critical acclaim in January.

Following the release of Kanye West’s album on June 1, fans searching for it on streaming platforms stumbled on Burna Boy’s ‘Ye’ and many downloaded it.As  at the time of filing this report the song has 6.5 YouTube views

The self-proclaimed Baddo  continued to expand his YBNL empire by signing on more artistes. His songs, ‘Science student’ and Gbana’ are arguably one of the biggest tunes of 2018.

We won’t forget in a hurry the role Funlola played in the movie ‘Tatu’. Funlola portrayed excellently the character of a catholic nun. She took on the character like a garb and gave it her best shot. Little wonder the movie got her a nomination at the 2018 edition of African Magic Viewers Choice Awards. 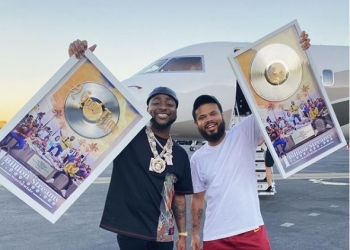 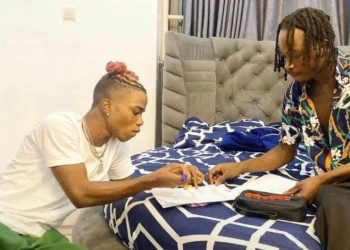 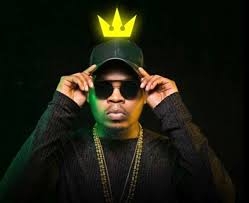