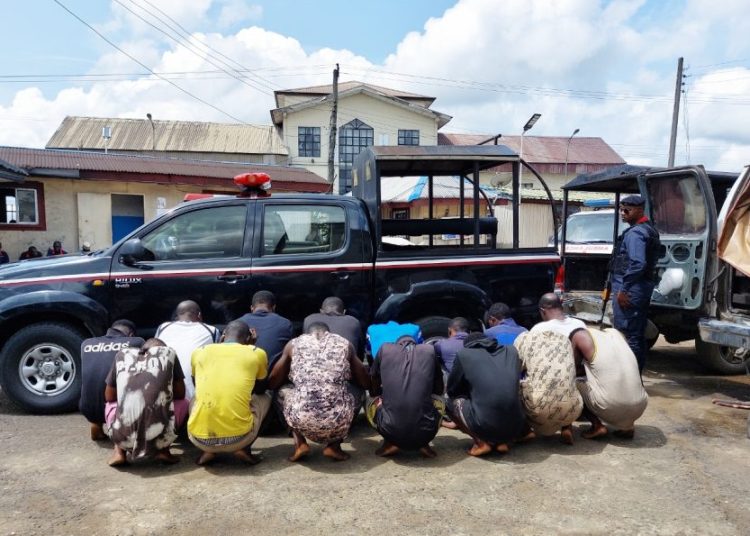 The corps Commandant in the state, Mr Michael Ogar, paraded the 16 male suspects before newsmen in Port Harcourt.

He said they were arrested by operatives of NSCDC and Nigeria Navy during separate raids at different locations in the state.

According to him, the operations led to the seizure of about 200,000 litres of adulterated diesel that was being readied for distribution to unsuspecting motorists in the state.

“Eight of the suspects were arrested by operatives of NSCDC’s anti-vandal unit while the other eight were handed over to us by Nigeria Navy Ship Pathfinder Port Harcourt.

“The 16 suspects were arrested for their involvement in oil theft and illegal refining of diesel.

“Some of the suspects were caught moving about 200,000 litres of diesel with their trucks, Sport Utility Vehicles and other cars to different locations in the state before their arrest,” he said.

Ogar said the command had made several arrests and confiscated petroleum products following the marching order to the NSCDC by Minister of Interior, Rauf Aregbesola and Gov. Nyesom Wike of Rivers.

He assured the people that the command would not rest until all forms of illegal bunkering of petroleum products and vandalising of oil and gas installations were stopped in the state.

“We are not going to compromise on our mandate. The many arrests and seizures show that our officers and men have been complying to government directives to stop illegal bunkering.

“Aside this, we are also going after landlords who connive with criminals by allowing them to use their buildings and facilities to illegally bunker petroleum products.

“The command is already on the trail of such landlords, and will arrest and charge them to court for allowing their property to be used for illegal activities,” he added.

The commandant said the suspects would soon be charged to court while the command would seek the forfeiture of the seized vehicles and petroleum products to the Federal Government.