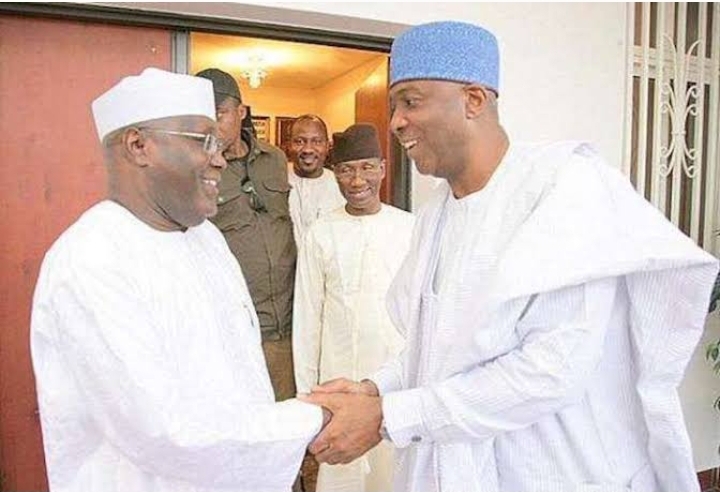 Alhaji Atiku Abubakar, and Dr. Bukola Saraki, both presidential aspirants on the platform of the Peoples Democratic Party (PDP) have vowed to restructure Nigeria if elected president in 2023.

TheNewsGuru.com (TNG) reports both presidential aspirants made the promise when they visited delegates to consult with them in two different States.

On his part, Abubakar made the promise on Saturday in Calabar while addressing party delegates and stakeholders as the party prepares for its May 28 and 29 presidential primary.

He said if he is elected president of Nigeria, he would work with the National Assembly to restructure Nigeria.

The former Vice President said he would give more powers to both the state and local government councils.

According to him, it would be the fault of the electorates if credible people are not elected in 2023.

“History will judge the electorates if we fail to elect the right people to positions of power.

“I am ready, qualified, available and have the right credentials which reasons I have offered myself to lead this country.

“I have the capacity, determination and courage to fix the issue of insecurity in Nigeria,” he said, adding that

the PDP can no longer afford to be in opposition, noting that they will reclaim both Cross River and the country.

Also speaking at the meeting, Mr Liyel Imoke, former governor of Cross River, commended the former vice president for his doggedness, saying he is one of the experienced founding fathers of the PDP.

Imoke claimed that Abubakar was the People’s choice in the 2019 presidential election even though he did not win the election.

He said the PDP in Cross River is one family and would pull their support behind him.

TNG reports Abubakar ran as governor of Adamawa in 1990, 1997 and 1998 before becoming the running mate to former President Olusegun Obasanjo in 1999.

Meanwhile, on his part, Saraki made the vow on Saturday in Benin, while addressing PDP national delegates from the state ahead of the presidential primaries.

He explained that he is in Edo state to seek the support of the delegates towards his aspiration.

“I am the person that has the experience to lead Nigeria following my headship of the National Assembly.

“I am here to seek your support to ‘rescue’ Nigeria.”

Saraki, a former governor of Kwara, also said that as governor, the state made some investment in health, education, and agriculture.

He added that the model is still being used till date in the state.

“When I become the president, we shall work together,” he said.

He also promised to make health care services free for all Nigerians, if elected president.

Responding, Dr Tony Aziegbemi, state chairman of the party, said Nigeria needs a man of courage like Abubakar to move the country out of the present economic and security challenges.

In a similar vein, Bauchi State Governor, Bala Muhammad has said his administration will rebrand Nigeria and give power to the periphery if  elected as president in  2023 elections.

Muhammad announced the plan on Monday in Kaduna while interacting with the Peoples Democratic Party (PDP) delegates, seeking their support in the coming 2023 presidential primary elections.

“I am passionate of this state because it is the centre of our political growth and development in the north, the headquarters of northern region; Kaduna accomadates everybody and a symbol of diversity.

“I worked in different  ministries, departments and agencies which gave me the opportunity to intermingle with people from all parts of the country and understood the diversity, the enormous challenges in the country, ” he said.

He said his wealth of experience on public service made him a better candidate as he had good antecedent through the position he held in the past and also as a serving governor.

Muhammad stated that he had deployed  competence, knowledge and understanding of the country to form a government of unity while serving as a minister in the Federal Capital Territory.

According to him, critical sectors such as education, health, water supply, security and infrastructure were improved in FCT during his reign as the minister.

“Later I joined the legislature where I met people like Sen. Ahmed Makarfi  and others. It was a training ground for me and I learnt a lot from him.

“In Bauchi, we did a lot with little resources. But we made sure labour had dignity, payed pension and gratuity.We were using knowledge and experience, not what we have in the treasury.”

He explained that his administration had executed a water project inherited, which would produce water need of Bauchi in the next 50 years.

He said vigilantes were engaged in ensuring peace and security in the state.

He noted that he would bring knowledge, good governance and patriotism to system and would ensure that resources were evenly distributed across the country without nepotism and favour.

Also, Sen. Makarfi said Muhammad was one of the candidate he respected, adding that he was reliable and capable of taking Nigeria to the Promise Land.