by Danladi Yabagi
in News, Politics
Reading Time: 3 mins read
A A
0 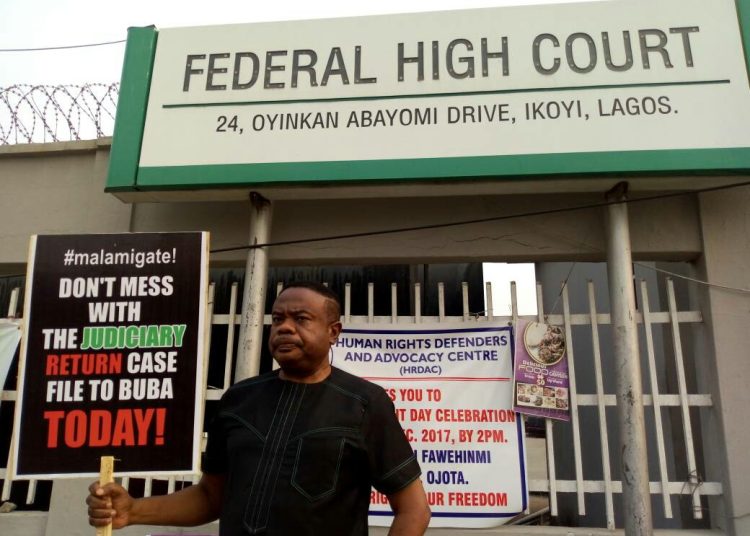 The Federal High Court in Lagos has declared Abdul-Kareem Shittu as the PDP House of Representatives candidate for Ikorodu Federal Constituency in 2023.

Justice Daniel Osiagor made the declaration on Friday, saying Shittu won the party’s Reps primary election conducted May 24, 2022 by a simple majority.

Justice Osiagor ordered the PDP to submit Shittu’s name to the Independent National Electoral Commission as the validly nominated candidate for the constituency.

He ordered this while delivering judgment in Shittu’s suit challenging the PDP’s purported submission of the name of the third defendant in the suit, Awesu AbdulAzeez to INEC as its candidate for the constituency.

The PDP and INEC are first and second defendants.

Delivering judgment on preliminary objection of the 3rd defendant on the ground that the matter was statute-barred, Justice Osiagor held that the plaintiff did not run afoul of Section 285 of the Electoral Act which prescribed a 14-day window for pre-election matters.

The Judge further held that what Shittu complained of was not the result of the election but the purported submission of the name of the third defendant to INEC on June 17, which he became aware of on June 18, adding that the plaintiff’s suit took care of that window limitation.

On the third defendant’s objection that the plaintiff did not seek the resolution of the dispute through the internal mechanism of the party as stipulated in the party’s constitution, Justice Osiagor held that the party’s rule was subservient to the Electoral Act.

He added that the provisions in the party’s rules which provided for internal mechanism in dispute resolution could not rob the Federal High Court of jurisdiction that was freely given under the Electoral Act.

The judge also held that there was no cogent reason given for the repeat election of June 6, nor the cancellation of that primary election of May 24 as the INEC form was signed by officials of the party responsible for same.

In addition, Justice Osiagor noted that the INEC official countersigned it with the name of the plaintiff written on it as winner of the primary election.

The judge said to make matters worse, the PDP did not come to court to deny or file any document to prove the genuineness of the June 6 result tendered by the plaintiff.

In all, Justice Osiagor granted prayers one to five on the face of the plaintiff’s motion paper. He struck out reliefs six and seven, and dismissed reliefs eight and nine.

The judge warned that politicians should note that gone were the days when they would gather people together in the name of elections and later go back to over rule the mandate given by the people.

In his affidavit before the court, Shittu had averred that he participated in the primary election conducted by the PDP to elect its candidate for the House of Representatives in Ikorodu on May 24, 2022, and got the highest number of vote cast.

He averred that having won the primary election, his name was announced in the presence of all the party’s members who witnessed and participated in the election and his name was entered into the official result slip of the party.

Shittu stated that the party later cancelled the primary election due to a petition written by the third respondent, and the party rescheduled the election following which it was held on June 6.

He averred that at the rescheduled primary election in which he and Awesu AbdulAzeez participated, both of them got the same number of votes and based on that and in line with the party’s guidelines for primary election to nominate its candidate, there should be re-run.

The plaintiff added that the party didn’t conduct any re-run election but went ahead to nominate the third respondent as its candidate to INEC.