As Nigeria prepare for general elections in 2023, Nigerians on twitter are reacting to photos of two top Nigerian politicians taken at the departure lounge of the Nnamdi Azikiwe International Airport Abuja on Saturday June 11.

Former senator representing Kaduna Central and President of the Civil Rights Congress of Nigeria Shehu Sani, posted photos taken with former Governor of Anambra State and 2023 presidential aspirant under the Labour Party Peter Obi, with a caption describing himself as “poor”.

“My friend Peter joining poor people like me on the masses side of the Airport,” Sani wrote, in what some people consider to be a campaign stunt.

Reacting, a twitter user @joeljacob202 said: “Nope, the caption should be, your friend Peter Obi joining stingy people like you on the masses side of the airport. Peter Obi throughout his tenure as governor of Anambra State was known to be very stingy, these was attest to by even his closest friends and relatives”.

The user added: “For a senator whose only achievement was sharing transistor radio, you can see the relationship”. 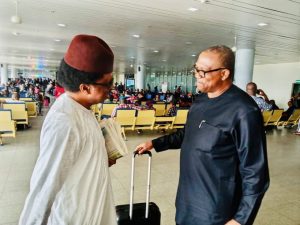 These comments sparked a debate on the platform, with many Nigerians saying they would choose a “stingy” leader over a generous one, if it meant being prudent with public funds.

“We prefer a stingy man than the philanthropists who only enrich their circle of friends and allow the rest of us to suffer. The government house is not for father Christmas! It is to build capacity and deliver good governance. It is to serve you and I, not to do us a favor,” said a user named Victor.

Meanwhile, the International Monetary Fund (IMF) has warned that debt servicing may gulp 100 per cent of Nigeria’s revenue by 2026, if the government fails to implement adequate measures to improve revenue generation.

“The biggest critical aspect for Nigeria is that we have done a macro-fiscal stress test, and… almost 100 per cent is projected by 2026 to be taken by debt service.

“So, the fiscal space or the amount of revenues that will be needed and this without considering any shock is that most of the revenues of the federal government are now, in fact, 89 per cent and it will continue if nothing is done, to be taken by debt service,” IMF’s Resident Representative for Nigeria, Ari Aisen revealed.

Earlier this year, it was disclosed that the Nigerian Government spent N4.2trillion on debt servicing between January and November 2021, which represents 76.2 per cent of the N5.51trillion revenue generated during the period.

Nigeria is projected to spend N3.61trillion on servicing Nigeria’s debt burden in the 2022 fiscal year, which represents about 34 per cent of the 2022 anticipated revenue of the country.

Nigeria’s debt stock, which was about N39.56tn as of December 2021, is likely to reach N45.95trillion following plans by the Debt Management Office to borrow an additional N6.39trillion to finance the 2022 budget deficit.