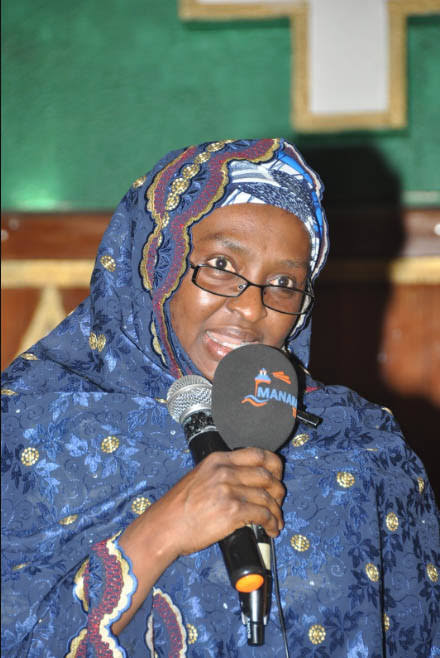 The House of Representatives on Wednesday backpedalled on the alleged information it gave that the Independent National Electoral Commission (INEC), approved the extension of the Continuous Voter Registration in the country.

TheNewsGuru.com reports that the Chairman, House Committee on Electoral Matters, Hon. Aisha Dukku at plenary speaking on the motion promoted by the House Minority Leader, Hon. Ndudi Elumelu, queried that INEC was refusing to comply with the resolution of the House and a standing court order not to halt the voter’s registration process, informed the House that the INEC Chairman, Professor Mahmood Yakubu during the meeting held on Tuesday afternoon agreed to all the prayers of the motion.

“Mr. Speaker, as I earlier told you we met with INEC chairman yesterday (Tuesday) based on the referral to our committee we thought it was urgent so we invited INEC and Professor Yakubu Mahmood was with us throughout yesterday afternoon and part of what we agreed to was that he has already agreed to extend but for the court injunction he is to appear on the 29th of June.

“That notwithstanding, he said it has been guaranteed that it has to be extended, and not just extending but also add additionally done during weekend.

He has agreed to that and that he is going to make a statement very soon to that effect.

“That extension also involves additional machines, additional ad-hoc staff and of course he’s going to collaborate with the security agencies to make sure that that is also done. So all the prayers of the motion were approved and all members of the committee were there including the mover of the motion”, Hon. Dukku said.

However, speaking during a media chat with the intention to clarify the earlier report on INEC agreeing to the house resolution, the House leadership denied that the commission had agreed to extend the voter’s registration by 60 days.

Hon. Dukku said, “The House in the motion requested for 60 days and that was what we presented to INEC. We are telling you this is the outcome of the meeting that took place yesterday.

“And INEC is also going to sit and meet based on what the House wants from the Commission. And part of what INEC told the House through the Committee on Electoral Matters is they are going to look at our request.

“However, happens they cannot be able to open the registration for the next 60 days because of the activities lined up before the general elections.

“They already outlined their activities, and part of their activities are a must, the clean up as the chairman mentioned is a must, the display of voters’ register is a must; it’s in the electoral law. They must do it and they need time to do that, to clean-up, to pint the voter’s cards, to distribute and to display the register in all the local governments of Nigeria. So there is no confusion whatsoever. Wait for INEC to announce what you want to hear.

When informed that she told the House during her presentation, that “all the prayers of the motion were approved,” Hon. Dukku who interjected said: “I’m what you said. The motion requested for 60 days.”

But the Chairman, House Committee on Media and Public Affairs, Hon. Benjamin Kalu said: “It is important that you hear from the Horse’s mouth, that was why I brought her. She is the chairman House Committee on electoral Matters and I am the mover of the motion and also doubles as the spokesman of the House of Representatives. So you can’t get anything more credible on this issue beyond these two people who standing before you.

“There was never a time the Chairman of the Committee (Hon. Dukku) announced to the House that INEC has extended the registration to 60 days from 30th of June. That was a misrepresentation which we don’t know where it’s coming from and we want you to retract for those of you who have published that. It never happened but as the mover of the motion, what I put across for the House to consider was for it to be extended for 60 days, having in mind of the 90 days of the publishing of this particular register of 90 days of publishing other issues that have to do because many people think it’s only registration that INEC handles.

“There are other responsibilities the Electoral Act has given to INEC. To the extent that INEC is beginning to ask for other Commission to come out of them to be able to help them with the job they are doing. It’s a lot of jobs in their hands. So if we choke them under that 90 days, we would not be able to meet up with the logistics that suppose to go with the planning and preparation for the execution of the 2023 election which is a couple of months from now.

“So if INEC comes back tomorrow after their meeting with the Council or the Commissioners and say that what is okay for them is 15 days or what is okay for them is 10 days, we should be able to know that it was scientifically chosen not just done at random or to offend anybody or to favour anybody. It’s just that it is practically impossible for them to achieve all that they are expected to do under their mandates that is coming from the new Electoral Act, within the space of time”.
Speaking on questions bothering on trending videos of under-aged citizens who were registering for the Voter’s cards, Hon. Kalu said: “The interaction we had yesterday was a very comprehensive interaction because the commission went beyond the motion to educate us on other activities they have been busy with regards to ensuring that the credible elements in the coming election was better enhanced.

“The system has a way of picking up the underage, if you like register 20 times the system will pick it up. So it is the way the system has been built that anything that does not go in line with what has been provided for in the Electoral Act and the Constitution of the Federal Republic of Nigeria will be responded to negatively by the equipment.

“So it is not what Nigerians used to think, Nigerians have always believed that there is always a way to short cuts, to bridge it and to do that and cut corners. INEC is busy in-house making sure that every threat to the system is blocked, including the one we just mentioned now.

“So, they can queue as long as they want if they are underage, the system will pick them up and will reject them, their name will not appear after the cleaning of the register. Remember, INEC is saying why we cannot wait until 90 days to the next election to stop registering people is that we need time.

“Like she just mentioned, to clean up the register and we agree with the analysis and when they clean up the register they might come up and say we registered one million people, if the system find out that there was a foul play, only the credible ones will still exist and the credibility of our next election starts from registration and do we are happy with what INEC has put in place and their integrity has risen from where it was to where it is at the moment and so far we are comfortable with that”.