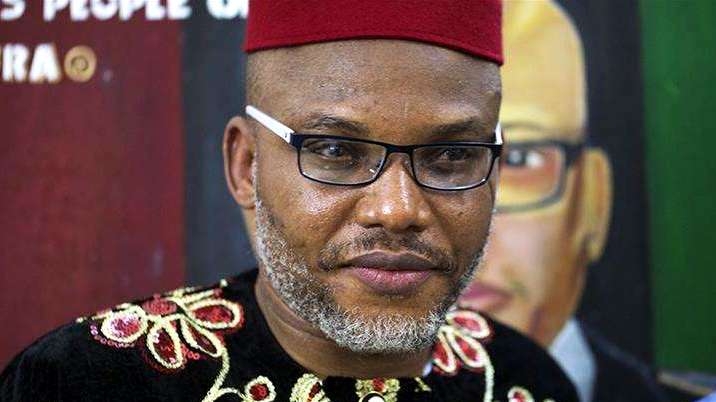 The trial of the leader of the proscribed Indigenous People of Biafra (IPOB), Nnamdi Kanu, resumed on Tuesday in a Federal High Court in Abuja.

The News Agency of Nigeria (NAN) reports that the Federal Government, through the Office of the Attorney-General of the Federation (AGF), on Monday, filed an amended 13-count bordeting on terrorism against Kanu.

The charge was raised from seven counts earlier filed against the IPOB leader.

The fresh charges border on treasonable felony and terrorism following the pending charges he was facing since 2016.

NAN reports that there was a heavy security presence at the Federal High Court complex in Maitama, Abuja.

Earlier, Chief Mike Ozekhome, SAN, told newsmen that he took up as the lead counsel in the terrorism case filed against Kanu, because he briefed him to do so.

Ozekhome said: “I took up his (Kanu) matter because he briefed me and I believe that he deserved justice and justice must be served.

Ozekhome arrived in court in company of another counsel, Mr Ifeanyi Ejiofor.

Ejiofor confirmed that the changes had been effected in the defence team.

Those originally charged along with Kanu were Benjamin Madubugwu and David Nwawuisi.

NAN reports that Kanu was arrested on Oct. 14, 2015 on 11 count charge bordering on terrorism, treasonable felony, managing an unlawful society, publication of defamatory matter, illegal possession of firearms and improper importation of goods, among others.

A judge at the Federal High Court, Abuja revoked Kanu’s bail that was granted him on health ground and issued a bench warrant for his arrest on the same date, over his failure to appear in court for hearing.

He has, upon jumping bail, been accused of engaging in subversive activities that include inciting violence through television, radio and online broadcasts against Nigeria and Nigerian State and institutions.

Kanu was also accused of instigating violence especially in the Southeastern Nigeria that resulted in the loss of lives and property of civilians, military, para military, police forces and destruction of civil institutions and symbols of authorities.