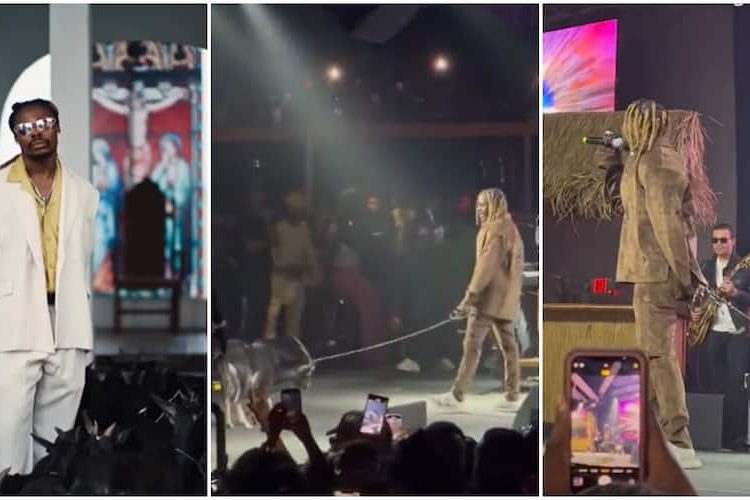 Famous Afrobeat singer, Asake, stunned fans as he performs Joha in Atlanta, USA Georgia’s capital, Atlanta, with the company of a live goat.

The singer who recently sold out the O2 Academy tickets and crashed the site in under 5 minutes captivates the attention of many with the new inclusion of his music style.

Asake who was live over the weekend at Atlanta Coliseum struggled to keep the ‘stubborn goat’ in check after thrilling his audience with the unexpected introduction.

The video making the rounds on social media captured Asake pulling the goat’s leash back and forth while the animal remained on a spot.

He is signed to YBNL Nation and Empire Distribution. His stage name pays homage to his mother, whose first nae is Asake.

Although he had been releasing music since 2018, his musical career progressed further in 2020 when he released the single “Mr. Money”.

A remix with Zlatan and Peruzzi followed. He continued to release more singles including “Medusa” and “Yan Yan” before he was signed by YBNL in February 2022.

In February 2022, Asake released his debut extended play Ololade, which featured Asake’s breakthrough song “Omo Ope” featuring Olamide. Another hit single that was released off the extended play would be “Sungba” which was remixed a month later with a verse from Nigerian artist Burna Boy. Asake would later go on to sign a distribution deal with Empire in July 2022.

Asake released his debut studio album Mr. Money With the Vibe on September 8, 2022, seven months after the release of his debut EP.

The album was supported by the hit singles, “Terminator”, “Peace Be Unto You” and the “Sungba” remix with Burna Boy”.

TheNewsGuru.com reports that the album received high praise from fans in his home country of Nigeria, as well as across the world and went on to break several records globally