Home » News » ASUU strike: After NLC warning protest, what is next will be worse than ENDSARS protest – Femi Falana 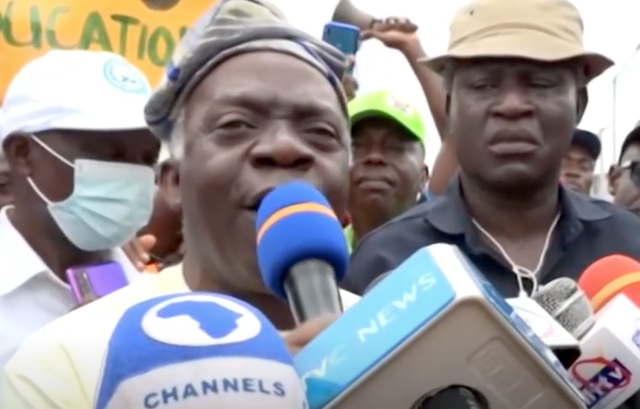 Human rights lawyer and a Senior Advocate of Nigeria, Femi Falana has advised the federal government of Nigeria to nip in the bud the ongoing nationwide warning protest embarked on by the Nigeria Labour Congress protest (NLC).

TheNewsGuru.com (TNG) reports Falana on Tuesday in Lagos State gave the advice, disclosing that by the time Nigerians come out fully for the NLC protest, ENDSARS protest will be a mere child’s play.

The human rights activist, who himself joined the Tuesday’s protest of the NLC at the State House in Lagos, stressed that this is more so because Nigerians are frustrated, disenchanted and embarrassed as a people. Falana argued that the federal government cannot be voting trillions on fuel subsidies and then say there is no money to fund education.

“Please, don’t let them deceive you by saying there is no money in our country. It is a lie. Note this, this year’s budget, the regime claimed N443 billion on the so-called fuel subsidy. Later, the regime went to the National Assembly and claimed that it is going to be N4 trillion.

“The latest now is that the regime is saying that it is going to be N6.5 trillion. Yet, there is no money for education but there is money to pay smugglers, who they claim are smuggling fuel out of Nigeria,” Falana said.

While stressing that the living standards of Nigerians have gotten, the human rights activist made a reference to President Muhammadu Buhari’s recent statement that he is tired and eager to leave office.

“The living standards of our people are getting worse by the day. We didn’t vote for a regime to cause hardship in Nigeria and that is what is going on.

“He has already told Nigerians that he’s tired and that he is anxious to go home. We are, therefore, saying today that Buhari must go,” Falana said.

TNG reports that the NLC is embarking on a two-day protest nationwide in solidarity with the Academic Staff Union of Universities (ASUU). ASUU strike has entered its fifth month since the union downed tools on February 14, 2022.