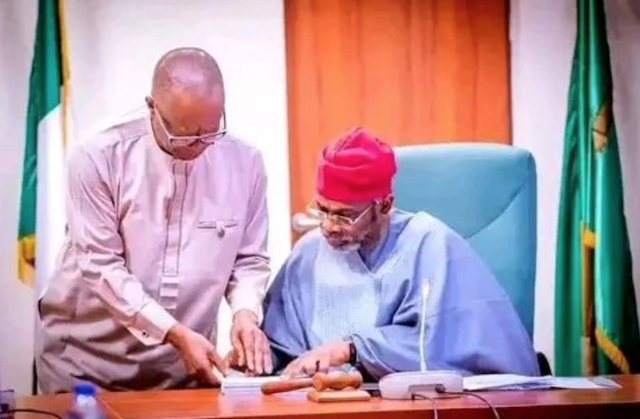 The Nigeria Labour Congress (NLC) has commended the Speaker of the House of Representatives, Femi Gbajabiamila, for his intervention in the protracted crisis between the Academic Staff Union of Universities (ASUU) and the Federal Government.

Mr Ayuba Wabba, the NLC President, gave the commendation at the inauguration of the Guest House of the National Union of Chemical, Footwear, Rubber, Leather and Non Metallic Products Employers (NUCANMPE), on Tuesday at Ijoko, Sango-Ota in Ogun.

The Speaker and the national leadership of ASUU met on Monday in Abuja over the crisis between university lecturers and the federal government.

He said: “I must commend those that are very proactive in trying to make sure that the true process of social dialogue to resolve the challenges are put in place.

“At the same time, those who cautioned people who think employment relationship is still old ways of master-servant relationship.

“Globally, that perspective has changed, the relationship is now symbiosis, that requires mutual respect from both the employers and the employees.

“I think this is what Gbajabiamila was playing out, I must commend him for his significant contributions and important roles, so that at the end it will be a win-win thing.

“I know when they go back to their classrooms, they will be very happy teaching our kids because these are intellectuals and their state of hearts will also speak volume how they impact knowledge.

“I commend the wisdom of the speaker,  there  is no use, using cohesion or force in solving the problem but through provision of dialogue that will comfort everybody,” he said.

He expressed optimism that ASUU would make a pronouncement soon about its resumption.

Wabba said he was very delighted in the inauguration of the NUCANMPE Guest House projects.

He said that the development was one of the active ways labour union was working to diversify in this present economic challenges.

Earlier, Olatunji in his remarks thanked the NLC national president for gracing the inauguration, saying there was need to diversify to generate more income for the union.

According to him, the beauty of the project is that the whole world will know that union leaders are  business oriented.

“This project will let people know that we know what we are doing, the leadership of this union sees the need to diversify and not relying only on members’ dues for income.

“That is why we decided to put up this 15 room guest house, as alternative source of income to the union,” he said.

Olatunji said that there was also an ongoing multipurpose shopping complex of over 49 stores including office spaces at Ijoko, Sanyo-Ota.