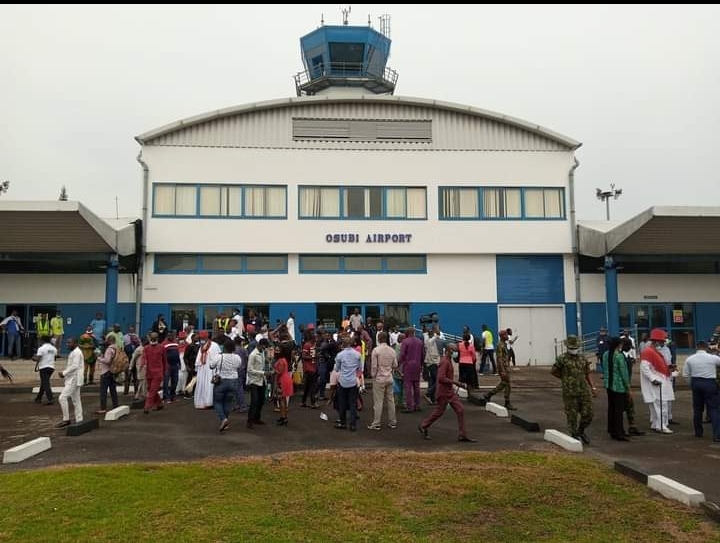 The Osubi airport was closed in February 2020, following controversy involving aviation service providers and management of the airport over alleged debt and mismanagement.

Following the approval given by the FG for the airport to resume operation, the State Governor Ifeanyi Okowa had said his government has had fruitful discussions with the management of United Nigeria airlines to commence full operations at the airport.

TNG reports the Osubi airport resumed commercial flights operations with the landing of an Air Peace commercial flight on Friday. It was not immediately clear why United Nigeria airlines had refused to operate the airport.

Present as the airport resumes operations are the Speaker of Delta State House of Assembly, Sheriff Oborevwori, and the Orodje Okpe, HRM Felix Mujakperuo.

Others are the Ovie of Uvwie, HRM Emmanuel Sideso, the Chairman of Okpe LGA, Mr Isaiah Esiovwa, and amongst other dignitaries.

Meanwhile, in his remarks, Oborevwori expressed happiness over the re-opening of the Osubi airport.

The Speaker of the Delta State House of Assembly revealed that the Osubi airport was now under the purview of the Federal Airports Authority of Nigeria (FAAN).

Oborevwori, who represents Okpe State Constituency in the State House of Assembly said: “Today is one of my happiest days and indeed a great pleasure to make this remarks”.

“Distinguished ladies and gentlemen, we are here to witness the re-making of history. I say this because on the 17th of April, 1999 when the Osubi Airport was commissioned,  it was first of its kind in the State. It attracted headlines as a  major breakthrough in air transportation in the State.

“Unfortunately, following controversy involving aviation service providers and management of the Airport, it was closed in February, 2020.

“One year after the shutdown, we are here gathered to witness the  reopening of the Osubi Airport by the Federal Government. To me, this is a milestone for the State and Okpe Local Government Area in particular.

“The strategic importance of the Airport to the oil and gas operations, and other commercial activities in the State cannot be over emphasized.

“In 2015, the number of passengers movements into the Airport, according to the Federal Airports Authority of Nigeria (FAAN) Aviation Sector Reports, was 187,630 (one hundred and eighty seven thousand, six hundred and thirty).

“I believe this figure would be more as at the date the Airport was shutdown.

“The implication of the above is that these passengers along with all the economic benefits were taken elsewhere. The loss of revenue to the State and the host community  during this period cannot be quantified. Therefore, it is a thing of joy that the Airport is being reopened today for business”.

Oborevwori seized the opportunity to acknowledge and appreciate some persons, who he said contributed towards the re-opening of the airport.

“First and foremost, I wish to thank our Governor, His Excellency, Senator Dr. Ifeanyi Okowa, for making the reopening of the Airport a priority by engaging the Federal Government on the need to reopen the Airport.

“In keeping with his promise of  the reopening without delay,  His Excellency provided  and installed  all the safety  requirements  which include all procedures,  practices and Covid – 19 protocols.

“His Excellency also provided an ambulance and made provisions for  maintenance for the take off of the reopening of the Airport. Your Excellency sir, we are grateful to you.

“Our special appreciation also goes to the Minister of Aviation,  Senator Hadi Sirika, for granting the approval for the reopening,” he said.

“In the same vein, I also wish to express my gratitude to my good friend and brother, Alfred Temile, for providing support for the first clearing of grasses in  the Airport and maintenance of the fire truck. Thank you for your love and kindness.

“Furthermore, I wish to thank the  Federal Airport Authority of Nigeria (FAAN) and their Management, which now have the management of the Airport  under their purview.

“In the same manner, I also wish to thank  and urge the NNPC, NAPIMS and all the regulators to ensure the smooth running of the Airport. Finally, I am grateful to everyone that contributed in  one way or the other for the approval of the reopening of the Airport,” Oborevwori said.