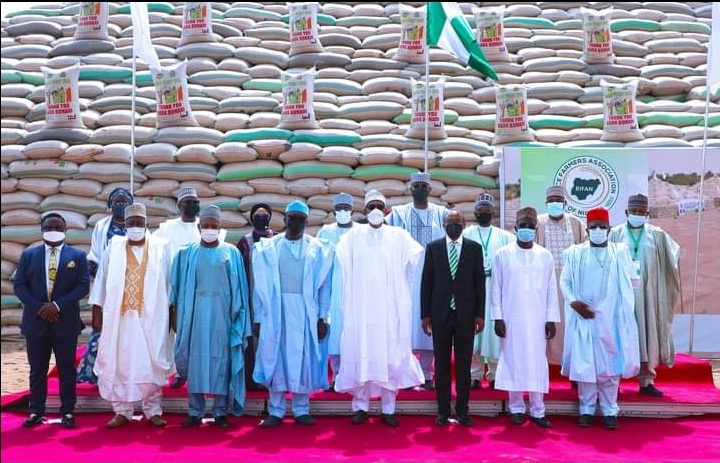 Buhari gave the commendation while unveiling the mega rice pyramids initiative of the CBN and Rice Farmers Association (RIFAN) in Abuja.

He said that the ABP initiative had enabled massive rice production while sustaining the country’s food security agenda, adding that its sustenance would drive down prices of food items in the country.

Also speaking at the event, Mr Godwin Emefiele, Governor of the CBN said the Apex bank, through the ABP had financed about four million farmers across 21 commodities across the country, who have cultivated 5.3 million hectares of land.

He said that the ABP had catalysed the rural economy and built a sustainable framework for financing small holder farmers in Nigeria.

“The programme has developed an ecosystem among all nodes of the agricultural value chain and these linkages can be better optimised through synergy among all stakeholders.

“As at the end of December 2021, we have financed 4.48 million farmers that cultivated 5.30 million hectares across 21 commodities through 23 Participating Financial Institutions in the 36 States of the Federation and FCT,” he said.

Emefiele commended the President for initiating the ABP and for supporting “Agric revolution ” that has put Nigeria on the path to food sufficiency.

“I am particularly delighted because these stacks of rice pyramids provide undisputable and unassailable evidence of significant progress under President Buhari’s food security initiatives.

“We may also recall that the ABP was launched in the early days of this administration. It is therefore fitting that the unveiling of the largest rice pyramids in Africa is coming right within your tenure.

“I personally salute your vision of making agriculture one of the focal points of your administration.

“Like the vision of great leaders that prepares countries for the unforeseen, this vision prepared us for the unanticipated impact of Covid-19 on food production,” he said.

The CBN governor commended Nigerian smallholder farmers and leadership of the various commodity associations for their “diligence, bravery, patriotism, and adaptability” in the midst of insecurity.

“The past few years have been quite challenging as they have battled with insurgency, banditry, lock downs and other related setbacks.

“Indeed, we lost some farmers to insurgency attacks nationwide whilst some could not access their farms for several months. Yet, they kept the faith.

“They did not give up, they persevered, they did not abandon our fight for food self-sufficiency. Today’s event, therefore, is a celebration of their doggedness and an appreciation of their commitment to food security,” he said.

“These expansions has not only made Nigeria the largest rice producer in Africa, but has also unlocked enormous private sector investment in the rice value chain.

“The number of Integrated rice mills grew astronomically from six in 2015 to over 50 in 2021 with many more in various stages of completion,” he added.

Emefiele explained that the mega pyramids being launched represented aggregated paddy rice submitted as repayment of loans by RIFAN farmers under the 2020 dry season and 2021 wet seasons.

The RIFAN President, Aminu Goronyo, commended the President as well as the CBN governor for their unwavering support to agriculture.

He assured that rice farmers would reciprocate the support by taking steps to increase production and ensure affordability of the commodity.

Also presented awards were Govs. Abubakar Badaru of Jigawa, Atiku Bagudu of Kebbi state, the CBN governor as well as the RIFAN president.

AFCON 2021: Super Eagles are one of the best in Africa – Guinea-Bissau coach

AFCON 2021: Super Eagles are one of the best in Africa - Guinea-Bissau coach