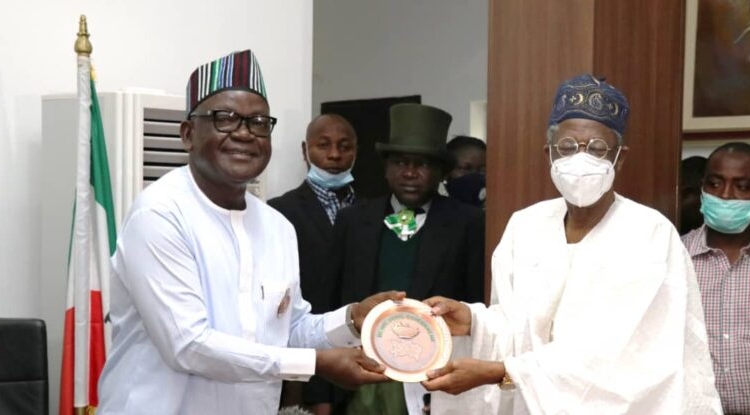 Gov. Samuel Ortom of Benue on Monday appealed to President Muhammadu Buhari to sustain the policy on ban of rice importation and not succumb to any pressure.

The governor made the appeal in Makurdi when the Minister of Information and Culture, Alhaji Lai Mohammed paid him a courtesy visit.

The News Agency of Nigeria (NAN) reports the minister was in Makurdi for formal take-off of the North-Central Zonal Headquarters of National Institute for Hospitality and Tourism (NIHOTOUR).

The campus built by the state government was handed over to the minister on behalf of NIHOTOUR.

During the visit, Ortom said the state as the food basket of the nation, commended the president and the Federal Government for the policy which helped in boosting rice production and agriculture in general in the state.

“The ban on rice importation remains a major milestone in the development of agriculture in Benue. We want to appeal to the Federal Government to continue with the policy.

“There might be hardship for a little while but farmers are smiling to their banks now compared to what used to happen. I have been into farming since 1984 and I m a living witness to this development.

“Before now, when we cultivate rice, we were not able to sell even the cost of production but today things have changed. Just harvest, the market is already there,” he said.

The governor said many youths had ventured into rice farming thereby solving the challenge of unemployment.

He assured that with sustained encouraging policy and a value chain in the sector, Benue had the capacity to produce the staple food for the country.

Ortom also urged the Federal Government to compel the Central Bank of Nigeria to provide incentives for farmers and private investors in the value chain.

The governor also thanked the president for the support to the state in addressing the challenge of insecurity.

According to him, Benue is relatively calm in terms of security because of the adequate security apparatus provided by the Federal Government.

He said the issue of farmers-herders clashes had been reduced to the barest minimum with the help of the laws passed by the state banning open grazing.

Ortom said with the support of the security agencies, no fewer than 400 herdsmen had been arrested for infraction out of which 140 had been convicted.

He appealed to the Federal Government to help the state in the relocation of internally displaced persons as a result of the conflict to their homes.

Earlier, the minister hailed the governor’s efforts in agriculture and in tourism development.

He specifically thanked the governor for keeping his promise in donating the edifice for the institution.