by Olaotan Falade
in News, Top Story
Reading Time: 7 mins read
A A
0 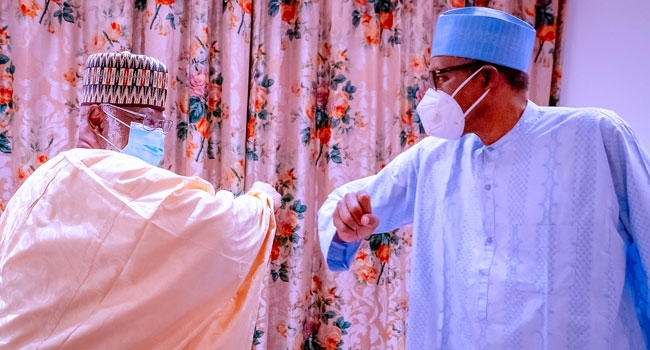 President Muhammadu Buhari on Saturday rated the danger posed to the country by illicit drugs as worse than those posed by insurgency, banditry and other threat to the stability of the country.

President Buhari made the assertion as he launched the War Against Drug Abuse (WADA), an initiative of the National Drug Law Enforcement Agency (NDLEA), to mark the United Nations Day Against Drugs Abuse and Illicit Drug Trafficking (2021), in Abuja.

The President, who was Special Guest of Honour at the launch, also charged the NDLEA to intensify efforts at ridding the vast forests of the Southwest and South-South regions of the country of criminal elements, who had made the places their hideouts, from where they launch criminal onslaughts as well as for farming marijuana.

Speaking on the danger the menace of abuse of drugs and illicit substances as well as drug trafficking posed to Nigeria, the President, who was represented by the Secretary to the Government of the Federation (SGF), Mr Boss Mustapha, noted the onslaught is targeting three generations for destruction.

“The war against drugs is a war that must be fought by all, it is, therefore, my pleasure, to declare on behalf of the good people of Nigeria, a War Against Drug Abuse (WADA), not just as a slogan, but a call for civil action for all Nigerians to take an active part in this war.

“Let me say that this war is more deadly than the insurgency we have in the Northeastern part of the country or the acts of banditry in the Northwest or the acts of kidnapping that transcends all the geopolitical zones of this country, because it is a war that is destroying three generations because I’ve seen clips of where grandparents are on drugs, parents are on drugs, and by extension, their wards, their children are on drugs.

“So this is a war that It is targeting three generations in a stretch. So it is more deadly than even the security challenges that we are having in this country and I believe strongly that every effort must be put in place to ensure that we deal with the issues of substance abuse and trafficking and manufacture so that we can get to the root cause as ably elucidated by our keynote speaker this afternoon, of the mirage of insecurity problems that are confronting this nation.

“I believe strongly, with every bit of conviction, that if we are able to deal with the issues of drug abuse, substantial, our security challenges will drastically reduce as we walk towards a drug-free, Nigeria.

“I once again implore all Nigerians from every strata of life; our traditional institutions, our religious leaders, our local leadership at every level, to be very vigilant and to support this cause and the war against drug that has declared on this day, the 26th of June they 2021,” the President said.

The President also tasked the NDLEA to swing into action by descending on specific isolated forests in different parts of the country, especially in the Southwest and South-South regions of the country to dislodge criminal elements engaged in plantation of cannabis in these forests, as well as using same places as launching grounds for their criminal activities.

“I am directing the NDLEA to develop a robust risk-communication and community engagement strategy that will not only disseminate the four pillars of the plan to responsible entities but also deal with destroying production sites and laboratories, break the supply chain, discourage drug use and prosecute offenders as well as traffickers, rehabilitate addicts and enforcement of relevant laws.

“I want to particularly draw the attention of the agency to the fact that the use of many of our forests as criminal hideouts is because large swathes of cannabis plantations are hidden deep within those forests, especially in the Southwest and the South-South.

“You may, therefore, need to drive these criminal elements from such hideouts because they use it for the growth of these plants and also as a repository for criminal elements to conclude and plan their adventures on our people.

“On this United Nations anti-drug day, I call on all families, schools, civil society organisations, professional associations, religious organisations, the academia, community leaders and individuals to work for the common good in order to rid their communities of drug use and trafficking.

“As your President, I will continue to address underlying causes of drug abuse, including poverty reduction, for which my pledge for lifting 100 million Nigerians out of poverty in the next 10 years and strengthened by the recently developed National Poverty Reduction with Growth Strategy signposts my unwavering commitment.

“Finally, I would like to appreciate our stakeholders and international collaborators, especially the European Union, and the United Nations Office for Drugs and Control, for their unwavering support to our drug control efforts, including the development of our roadmap.

“Also appreciated are the members of the inter-ministerial committee on drug control, civil society organisations, the academia, for their contributions and efforts to our National Drug Control initiatives”, he said.

Also speak Chairman of the NDLEA, Brig. Gen. Buba Marwa, on his part, put the value of cash and drugs seized in the past five months since he came on board at over N90 billion, even as he added that over 2,180 traffickers have been arrested, including five drug barons controlling different cartels across Nigeria.

He also revealed that a record 2.05 million kilograms of drugs have been intercepted and seized across the country; and 2,100 drug offenders prosecuted with 500 jailed by courts.

“While the statistics are impressive, we wouldn’t deceive ourselves that we have succeeded in cleaning the Augean Stable in five months. We have only made a head start. We need to sustain the momentum. We need to win the drug war. We cannot afford to be complacent,” he said.

Marwa said according to statistics, Nigeria is the highest users of cannabis worldwide, adding that revelations from kidnapped victims have collaborated the facts that illicit substances are enablers of insecurity currently plaguing the country.

“It is not difficult to conclude that drugs have been catalysts of terrorism, kidnapping, banditry, armed robbery and various violent conflicts that are currently Nigeria’s albatross.

“The enormity of the danger of drug abuse calls for an urgent need to nip the problem in the bud. This is the reason we have redoubled our efforts in the past five months with the Maxim of Offensive Action”, he said.

The NDLEA boss stressed “today, it is a glaring fact that Nigerian youths are involved in drug abuse. Over the years, an undesirable subculture had flourished whereby adolescents and young adults wantonly indulged in the abuse of illicit substances.

“They not only became addicted to conventional substances such as cannabis and prescription opioids, such as tramadol and codeine, they also experimented with dangerous mixtures leading to novel psychotropic substances such as ‘monkey tail’ and ‘skoochies’

“In the context of that warped reality, they also normalised the smoking of cannabis as we have seen in some popular music videos and on social media. “High” became part of their social media.

“So, it wasn’t surprising when research began to give us bleak statistics. The National Drug Survey 2019, for example, indicated that cannabis is the most commonly abused substance by an estimated 10.6 million Nigerians, some of whom started smoking as early as 19 years of age.

“The Global Drug Survey 2019, also, cited cannabis as the most abused substance with West Africa having the highest abuse prevalence. The World Health Organisation on substance abuse also stated unequivocally that cannabis is the most widely used illicit substance in Africa, with the highest prevalence, between 5.2% and 13.5%, found in West Africa.

“Ladies and Gentlemen, West Africa, by implication, means Nigeria.
He linked the successes recorded by the agency so far to the resolution by officers and men of the NDLEA to clean up Nigeria and make the country drug free”, he said.

He also said “and in this campaign, we are tackling the scourge of drug abuse and trafficking on all fronts. In addition to the arrest and prosecution of drug offenders, we have worked out intensive drug abuse awareness and sensitization programmes targeting different groups, with an emphasis on youths.

“In this regard, my administration has thrown the door open to all for partnership in the fight against abuse of illicit substances. It is to this end that we have set up a Special Purpose Committee to involve stakeholders in the cause”, he said.

The Speaker of the House of Representatives, Femi Gbajabiamila, urged the President to give nod to the appointment of 10,000 for NDLEA which he said was currently “understaffed”, “underfunded”, and “ill-equipped”.

Gbajabiamila, who was represented by Hon Francis Agwu, Chairman, House Committee on Drugs and Narcotics, said the NDLEA is using weapons used during the civil war, stressing the need to fight the menace of drugs abuse in the country as all crimes were enabled by narcotics drugs addiction.

He said the National Assembly was working to amend the Police Trust Fund Act to ensure that other policing agencies like NDLEA benefitted from the pool, adding that efforts would be made to guarantee accelerated endorsement of Mr President after its amendment.

“If the surge in crimes must be minimised, then we must fight narcotics drugs addiction,” he said.

The United Nations General Assembly Antonio Guterres, lamented that the world drug problem remains an urgent challenge that threatens to exacerbate damage impact and to hinder a healthy recovery.

Represented by the Country Representative, United Nations Office on Drugs and Crime (UNODC), Oliver Stolpe, he urged law enforcement agents to go after the criminals at the upper level of the drug trafficking chain who reap the highest profit and wreck the greatest havoc.

Guterres said, the 2021 world drug report of UN, shows that death and crime attributed to disorders have nearly doubled over the past decade. He said while new HIV/AIDS infections among adults have declined worldwide but not among people who inject drugs which account for 10 percent of new infections in 2019.

He said international cooperation has helped to limit the proliferation of new psychoactive substances but the problem is shifting to poorer regions where control systems are weaker, drug sales continue to rise and non-medical use of pharmaceuticals such as Tramadol and Codeine is expanding.

He added that drug trafficking and organized crime fuel and perpetuate circles of violence and conflicts. Armed groups and terrorists profit from the illicit drugs trade and the economic fall out of the COVID-19 pandemic has left millions of people even more vulnerable to drug crime and illicit drug cultivation.

Disparities in the access to essential control medicines in low and medical-income countries have further heightened the pandemic. For example, medical practitioners in West and Central Africa in 2019 had four doses of pain medication every day for one million inhabitants while in North America in the same the doses was nearly 32,000.

He said investing in balanced prevention as well as drug use and drug use disorders produce solid returns in the form of saved lives, healthier populations, improved workforce participation and safety and reduced criminal justice costs.

Many of the risk factors associated with crime and violence behaviors are also drivers of drug use and targeted efforts focusing on these overwhelming dynamics including childhood maltreatment and lack of support can help to strengthen prevention.