by Bartholomew Madukwe
in News, Nigeria
Reading Time: 2 mins read
612 6
A A
0 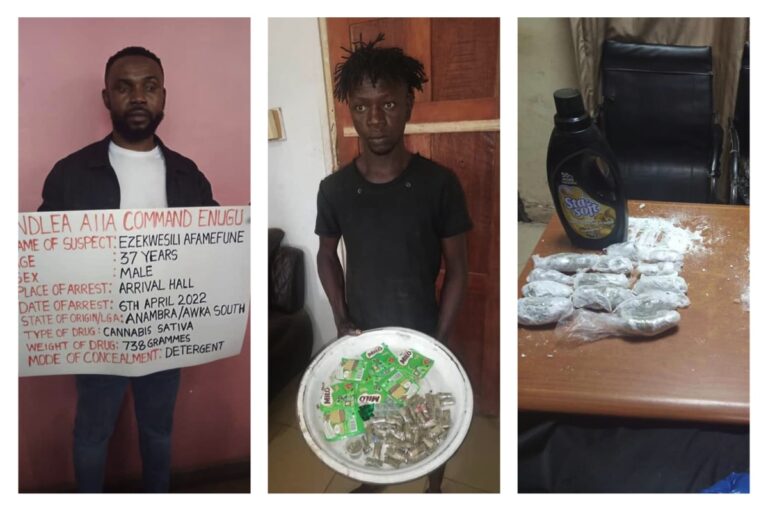 It was gathered that Ezekwesili brought in big pellets of skunk concealed in detergent containers. The drug weighed 730grams.

Skunk is made from from unpollinated cannabis plants which naturally contain higher levels of THC – the substance that gives recreational users the ‘stoned’ feelings they seek from the drug.

It can also cause nasty side effects, including paranoia and hallucinations.

In Zamfara state, one Chibuzor Uba, 30, was arrested on Friday 8th April with 1,955 ampules of pentazocine at Kaura Namoda area of Zamfara state.

The suspect who hails from Ihiala, Anambra state was nabbed with 11,190 tablets of Tramadol during the outward clearance of passengers travelling to Cameroon.

In Ondo state, a drug dealer who produces and sells skuchies, Oluwaseun Agboola, 25, was arrested on Thursday 7th April, at his Igoba, Second Gate, Akure residence where 73 bottles of skuchies weighing 77kg stocked in his kitchen were recovered.

In Lagos, an early morning raid in the notorious Akala, Mushin area of the state on Saturday 9th April led to the seizure of 746.25 kilograms of cannabis.

Chairman of the NDLEA, Brig. Gen. Mohamed Buba Marwa (Retd) commended officers and men of the MMIA, AIIA, Edo, Zamfara, Akwa Ibom, Lagos and Ondo state Commands of the Agency for the arrests and seizures.

He charged NDLEA officials across the country to remain focussed and abstain from acts capable of compromising or jeopardising the collective goal of ridding Nigeria of drug abuse and illicit drug trafficking.