by Olaotan Falade
in News, Sports
155
SHARES
1.2k
VIEWS
Share on WhatsAppShare on FacebookShare on TwitterShare on LinkedInShare on TelegramSend as Email
ADVERTISEMENT

Nigeria’s field and track athlete, Blessing Okagbare, 28, suffered an embarrassing moment in Oslo, Norway when her wig fell off as she jumped during a competition.

The Nigerian performed a near-perfect run followed by the hop, skip and jump and all seemed like it was going to end well.

But the jump was a good one, and she measured 6.21metres.

Between Blessing Okagbare and her hubby – Francis Ewherido

Once the white flag was raised, the jump given the white flag, the 28-year-old returned to the sandpit, somewhat sheepishly, to retrieve her wig.

She ended up finishing down in seventh spot at the meeting in Norway, falling well short of her personal best of 7m.

Okagbare won a silver medal at the 2008 Beijing Olympics and has won Commonwealth gold in the 100m and 200m.

She also holds the women’s 100m Commonwealth Games record with a time of 10.85secs, which she set in Glasgow in 2014.

"It is what it is" says Nigerian athlete Blessing Okagbare whose wig fell off while competing in Oslo ??‍♀️ pic.twitter.com/ZOeC7Ag3zg

Between Blessing Okagbare and her hubby – Francis Ewherido 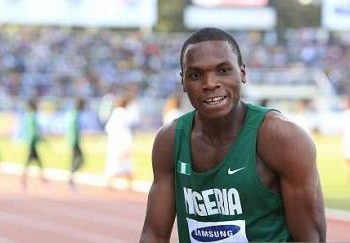 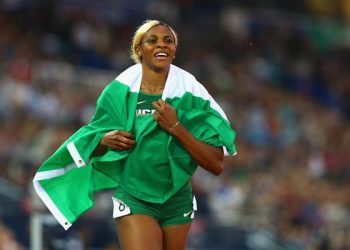