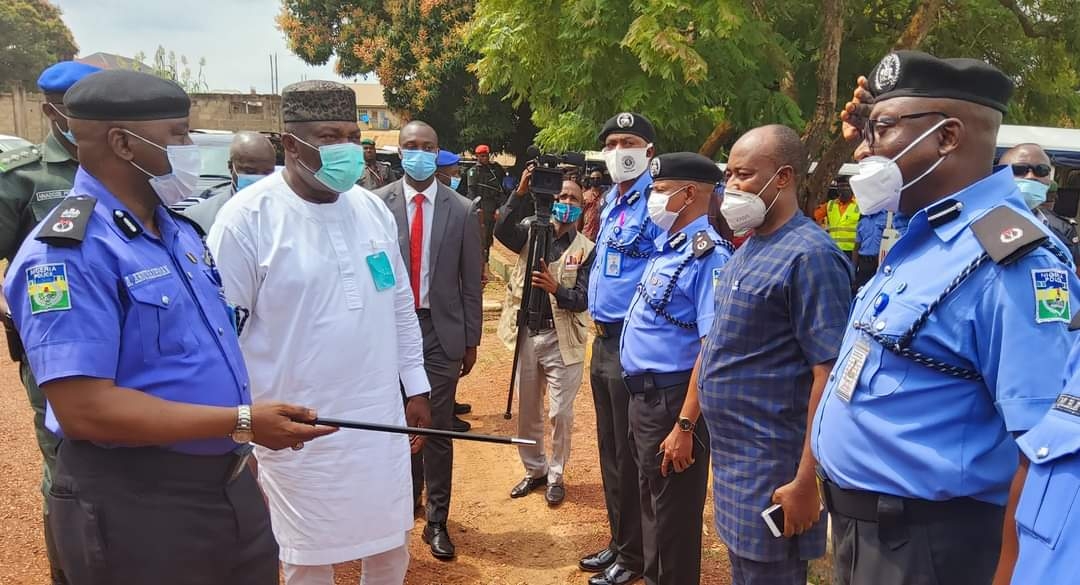 Governor Ifeanyi Ugwuanyi of Enugu State, on Wednesday, passionately appealed to men and officers of the Nigeria Police Force (NPF) to fully renew their ultimate commitment towards the provision of security of lives and property by returning to their duty posts across the state.

Gov. Ugwuanyi made the appeal when he visited the Senior Police Officers Mess, Agbani Road, Enugu, to address and commiserate with the members of the Enugu State Police Command, over loss of lives of private citizens and security personnel, grievous bodily injuries as well as destruction of private and public properties including security infrastructure.

The governor who described the mayhem unleashed by miscreants and hoodlums that hijacked the hitherto peaceful #EndSARS protests as “an unusual and challenging period for the Police Force” pointed out that it was needless and “an ill-wind that blew no one any good”.

Gov. Ugwuanyi stated that his administration “in our sensitivity to the mood and pains of the society under our watch,” has set up an Administrative Panel of Inquiry to determine the loss of lives and other damages and has also taken time to inspect the various degrees and nature of damage arising from the hijacked protests.

He added that his administration earnestly awaits the recommendations of the panel, reiterating its commitment to implement same with a view to soothing the pains of the security personnel and private citizens who were victims of the mayhem.

Noting that the psyche of the officers and men of the Police Force have been assaulted by the recent sad experience, the governor, who called for a minute’s silence for the deceased, expressed concern that “the self-evident low morale of the Police Force occasioned by the fallout of the #EndSARS protests has, in our judgment, increased the likelihood of crime in the state.

“I therefore passionately implore you to fully renew your commitment to the provision of security of lives and property in the state, as was the case before the protests. The good people of Enugu State had, before now, enjoyed your excellent policing service and wish that you come fully on stream and return to all the security posts in the state”, he said.

While thanking the people of Enugu State for their prayers, support and solidarity “in this challenging period”, Gov. Ugwuanyi equally urged them to renew their cooperation and partnership with the personnel of the security agencies to sustain the tempo of peace and good governance in the state.

Earlier in his welcome remarks, the Enugu State Commissioner of Police, CP Ahmad Abdurrahman, expressed the deepest appreciation of the Command to Gov. Ugwuanyi for his humility, sense of responsibility, concern, care and love.

Abdurrahman also commended the governor for finding it necessary and expedient, in spite of his tight schedule, to come and commiserate with the men and officers of the Command, over the unfortunate fallout of the #EndSARS protests.

The CP maintained that the visit signified that “we are under a very comfortable hand and care”.

He therefore urged the police officers to pray for the governor as well as extend “our love, dedication and patriotism to him to enable him comfortably discharge his responsibilities that God has placed on his shoulders”.