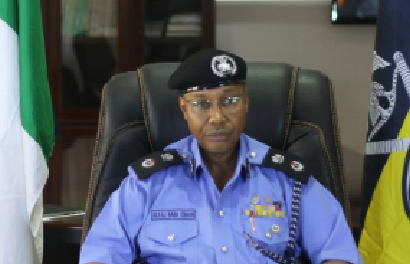 Announcing the appointment on Tuesday while speaking with State House Correspondents, Minister of Police Affairs, Maigari Dingyadi, said Baba’s appointment was carefully made, after the president considered issues of professionalism, competence, and numerous years of service.

TheNewsGuru.com, TNG reports that the immediate past IGP whose tenure elapsed in January stayed in office for two months more after President Buhari extended his tenure.

Meanwhile president urged DIG Usman Alkali Baba to among other things ensure that policing reform policies are fully prioritized to engender peace across the country.

Here are some quick facts about the new AIG, DIG Usman Alkali Baba:

The newly appointed acting inspector general of police born on the 1st of March 1963 and hails from Yobe state, bags a Masters in public administration from the University of Maiduguri, Borno state in 1997 and a Bachelor of Arts from the Bayero Usman University, Kano in 1985.

He has served in various capacities such as DIG Force CID and was also the Force Secretary at the Force Headquarters, Abuja.

He was in Ilorin as an Area Commander. He was the second-in-command in Ebonyi, He was also an Assistant Commissioner, CID in Kaduna and before then was DPO (Divisional Police Officer) in various places like Yola, Gombe, Kaduna, and Jos.